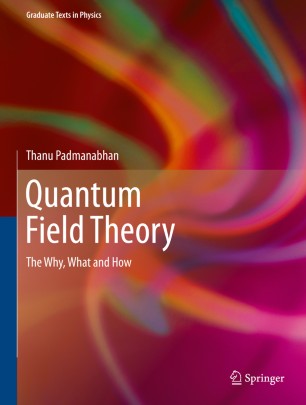 The Why, What and How

This book describes, in clear terms, the Why, What and the How of Quantum Field Theory. The raison d'etre of QFT is explained by starting from the dynamics of a relativistic particle and demonstrating how it leads to the notion of quantum fields. Non-perturbative aspects  and the Wilsonian interpretation of field theory are emphasized  right from the start. Several interesting topics such as the Schwinger effect, Davies-Unruh effect, Casimir effect and spontaneous symmetry breaking introduce the reader to the elegance and breadth of applicability of field theoretical concepts. Complementing the conceptual aspects, the book also develops all the relevant mathematical techniques in detail, leading e.g., to the computation of anomalous magnetic moment of the electron and the two-loop renormalisation of the self-interacting scalar field. It contains nearly a hundred problems, of varying degrees of difficulty, making it suitable for both self-study and classroom use.

Thanu Padmanabhan, currently Distinguished Professor at the Inter-University Centre for Astronomy and Astrophysics at Pune, India, is a theoretical physicist whose research spans a wide variety of topics in gravitation, cosmology and quantum gravity. He has authored 10 books and about 250 papers and reviews, many of which have had significant impact in their fields.  He was a Sackler Distinguished Astronomer of IoA, Cambridge, the President of the Cosmology Commission of the International Astronomical Union and the Chairman of the Astrophysics Commission of the International Union of Pure and Applied Physics and the recipient of Padma Shri, the Presidential medal which is the fourth highest civilian honor in India.

“The readership of this book consists of graduate students and researchers alike. … Full of valuable insight, this modern treatise is sure to become a classic text on a subject of central importance.” (Gert Roepstorff, zbMATH 1338.81002, 2016)