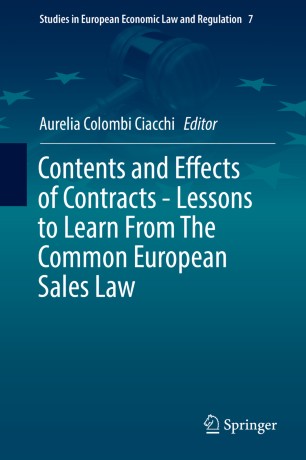 This book presents a critical analysis of the rules on the contents and effects of contracts included in the proposal for a Common European Sales Law (CESL). The European Commission published this proposal in October 2011 and then withdrew it in December 2014, notwithstanding the support the proposal had received from the European Parliament in February 2014. On 6 May 2015, in its Communication ‘A Digital Single Market Strategy for Europe’, the Commission expressed its intention to “make an amended legislative proposal (…) further harmonising the main rights and obligations of the parties to a sales contract”. The critical comments and suggestions contained in this book, to be understood as lessons to learn from the CESL, intend to help not only the Commission but also other national and supranational actors, both public and private (including courts, lawyers, stakeholders, contract parties, academics and students) in dealing with present and future European and national instruments in the field of contract law.

The book is structured into two parts. The first part contains five essays exploring the origin, the ambitions and the possible future role of the CESL and its rules on the contents and effects of contracts. The second part contains specific comments to each of the model rules on the contents and effects of contracts laid down in Chapter 7 CESL (Art. 66-78). Together, the essays and comments in this volume contribute to answering the question of whether and to what extent rules such as those laid down in Art. 66-78 CESL could improve or worsen the position of consumers and businesses in comparison to the correspondent provisions of national contract law. The volume adopts a comparative perspective focusing mainly, but not exclusively, on German and Dutch law.