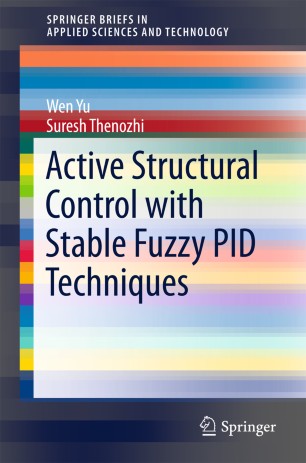 This book presents a detailed discussion of intelligent techniques to measure the displacement of buildings when they are subjected to vibration. It shows how these techniques are used to control active devices that can reduce vibration 60–80% more effectively than widely used passive anti-seismic systems.

After introducing various structural control devices and building-modeling and active structural control methods, the authors propose offset cancellation and high-pass filtering techniques to solve some common problems of building-displacement measurement using accelerometers. The most popular control algorithms in industrial settings, PD/PID controllers, are then analyzed and then combined with fuzzy compensation. The stability of this combination is proven with standard weight-training algorithms. These conditions provide explicit methods for selecting PD/PID controllers. Finally, fuzzy-logic and sliding-mode control are applied to the control of wind-induced vibration. The methods described are supported by reports of experimental studies on a two-story building prototype.

This book is a valuable resource for academic researchers interested in the effects of control and mechatronic devices within buildings, or those studying the principles of vibration reduction. Practicing engineers working on the design and construction of any sort of high-rise or vulnerable building and concerned with the effects of either wind or seismic disturbances benefit from the efficacy of the methods proposed.

Wen Yu received the B.S. degree from Tsinghua University, Beijing, China in 1990 and the M.S. and Ph.D. degrees, both in Electrical Engineering, from Northeastern University, Shenyang, China, in 1992 and 1995, respectively. From 1995 to 1996, he served as a Lecturer in the Department of Automatic Control at Northeastern University, Shenyang, China. In 1996, he joined CINVESTAV-IPN, Mexico, where he is currently a professor in the Departamento de Control Automatico. He held research positions with the Instituto Mexicano del Petroleo from 2002 to 2003. He was a senior visiting research fellow at Queen’s University Belfast from 2006 to 2007, a visiting associate professor at University of California Santa Cruz from 2009 to 2010. He also holds a visiting professorship at Northeastern University in China from 2006 until now. Dr.Wen Yu serves as an associate editor of Neurocomputing, and Journal of Intelligent and Fuzzy Systems. He is a member of Mexican Academy of Science.