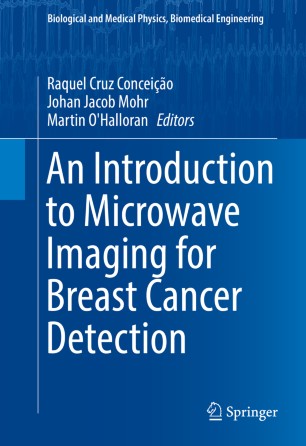 An Introduction to Microwave Imaging for Breast Cancer Detection

This book collates past and current research on one of the most promising emerging modalities for breast cancer detection. Readers will discover how, as a standalone technology or in conjunction with another modality, microwave imaging has the potential to provide reliable, safe and comfortable breast exams at low cost. Current breast imaging modalities include X- ray, Ultrasound, Magnetic Resonance Imaging, and Positron Emission Tomography. Each of these methods suffers from limitations, including poor sensitivity or specificity, high cost, patient discomfort, and exposure to potentially harmful ionising radiation. Microwave breast imaging is based on a contrast in the dielectric properties of breast tissue that exists at microwave frequencies.

The book begins by considering the anatomy and dielectric properties of the breast, contrasting historical and recent studies. Next, radar-based breast imaging algorithms are discussed, encompassing both early-stage artefact removal, and data independent and adaptive beamforming algorithms. Similarly, microwave tomographic reconstruction algorithms are reviewed, introducing the reader to both the fundamental and more advanced algorithms. The book also reviews research efforts to extract clinically useful information from the radar target signature of breast tumours. Finally, the book concludes by describing the state of the art prototype microwave breast imaging systems, with a particular emphasis on those which have progressed to the clinical evaluation stage.

This work is motivated by the fact that breast cancer is one of the leading causes of death amongst women in Europe and the US, and the second most common cancer in the world today. Such an important area of research will appeal to many scholars and practitioners.

Raquel Cruz Conceição is a post-doctoral researcher affiliated with both the Instítuto de Biofísica e Engenharia Biomédica, Faculdade de Ciências, Universidade de Lisboa, Portugal and Institute of Biomedical Engineering at the University of Oxford, UK. She is also Invited Assistant Professor at the University of Lisbon. She holds a PhD in Electrical and Electronic Engineering from the National University of Ireland Galway and a Masters in Biomedical Engineering from Universidade Nova de Lisboa. She has 8 years of research experience on the topic of Microwave Imaging, developing techniques to detect and classify breast cancer. She is the chair of COST Action TD1301 (Microwave Medical Applications, MiMed), and organises bi-annual meetings for over 200 research and medical participants from 29 countries. She has secured several research grants since 2005, most significantly a FP7 Marie Curie Intra European Fellowship. She has supervised and mentored 14 Master and PhD students, published 15 journal papers and 24 conference papers, co-authored with 48 international researchers, acted as reviewer for 18 journals and conferences, and is Associate Editor for Medical Physics. Also, she has been awarded the ANACOM URSI Portugal prize in 2013 and URSI Young Scientist in 2014, among other 6 prizes and awards.

Johan Jacob Mohr’s research has spanned a broad range of electromagnetic sensing technologies ranging from air- and satellite borne synthetic aperture radar interferometry for measurement of glacier dynamics, over lidar for wind sensing to microwave imaging for medical applications. He received his PhD in 1997 from the Technical University of Denmark (DTU), and was at an internship at the Radar Science and Engineering group at the Jet Propulsion Laboratory in 1994-95. He continued at DTU as assistant and associate professor with projects on interferometric synthetic aperture radar. In 2006, he received a university position at DTU, where he gradually changed focus to the development of a second-generation 3-D microwave tomography system for breast cancer detection suitable for clinical test. Included was improvement of data acquisition accuracy, methods for prediction of the accuracy of the resulting images and utilization of multiple frequencies.  Additionally, he supervised a wide range of bachelor and masters with Danish industry. In 2015, he joined Mellanox Technologies as Principal Engineer and is now working on system design and signal integrity.

Martin O’Halloran is a European Research Council (ERC) Fellow and Science Foundation Ireland Principal Investigator at the National University of Ireland Galway. His research interests span low-frequency and high-frequency electromagnetic imaging, radiofrequency hyperthermia and ablation, and the dielectric properties of biological tissue. He holds a PhD in Electrical and Electronic Engineering, and Master’s degrees in both Academic Practice, and Clinical Research from the National University of Ireland Galway (NUIG). He has over 20 national and international research awards, and only last year (2014) was awarded Engineers Ireland's Chartered Engineer of the Year and NUIG’s Early Stage Researcher of the Year for his work on medical device development. In the period from 2011-2015, he secured over €4.5 million in direct research and commercialization funding, and is technical-collaborator in two start-up medical device companies at NUIG. He has over 30 peer reviewed journal papers, and a similar number of international conference papers. He is also Vice-Chair of the MiMed COST Action (TD1301).