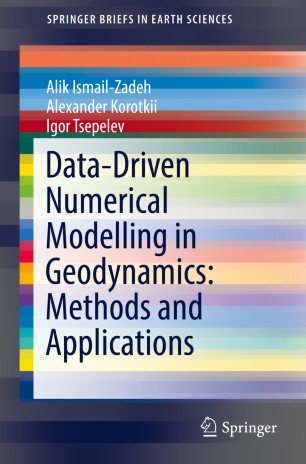 This book describes the methods and numerical approaches for data assimilation in geodynamical models and presents several applications of the described methodology in relevant case studies. The book starts with a brief overview of the basic principles in data-driven geodynamic modelling, inverse problems, and data assimilation methods, which is then followed by methodological chapters on backward advection, variational (or adjoint), and quasi-reversibility methods. The chapters are accompanied by case studies presenting the applicability of the methods for solving geodynamic problems; namely, mantle plume evolution; lithosphere dynamics in and beneath two distinct geological domains – the south-eastern Carpathian Mountains and the Japanese Islands; salt diapirism in sedimentary basins; and volcanic lava flow.
Applications of data-driven modelling are of interest to the industry and to experts dealing with geohazards and risk mitigation. Explanation of the sedimentary basin evolution complicated by deformations due to salt tectonics can help in oil and gas exploration; better understanding of the stress-strain evolution in the past and stress localization in the present can provide an insight into large earthquake preparation processes; volcanic lava flow assessments can advise on risk mitigation in the populated areas. The book is an essential tool for advanced courses on data assimilation and numerical modelling in geodynamics.