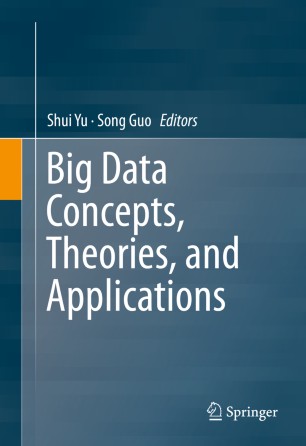 This book covers three major parts of Big Data: concepts, theories and applications. Written by world-renowned leaders in Big Data, this book explores the problems, possible solutions and directions for Big Data in research and practice.  It also focuses on high level concepts such as definitions of Big Data from different angles; surveys in research and applications; and existing tools, mechanisms, and systems in practice. Each chapter is independent from the other chapters, allowing users to read any chapter directly.

After examining the practical side of Big Data, this book presents theoretical perspectives. The theoretical research ranges from Big Data representation, modeling and topology to distribution and dimension reducing.  Chapters also investigate the many disciplines that involve Big Data, such as statistics, data mining, machine learning, networking, algorithms, security and differential geometry. The last section of this book introduces Big Data applications from different communities, such as business, engineering and science.

Big Data Concepts, Theories and Applications is designed as a reference for researchers and advanced level students in computer science, electrical engineering and mathematics. Practitioners who focus on information systems, big data, data mining, business analysis and other related fields will also find this material valuable.

Dr. Shui Yu received the B.Eng. and M.Eng. degrees from University of Electronic Science and Technology of China, Chengdu, P. R. China, in 1993 and 1999, respectively, and the Ph.D. degree from Deakin University, Victoria, Australia, in 2004. He is currently a Senior Lecturer with the School of Information Technology, Deakin University, Melbourne, Australia. He has published around 100 peer review papers; many of them are in top journals and top conferences, such as IEEE TPDS, IEEE TIFS, IEEE TFS, IEEE TMC, and IEEE INFOCOM. His research interests include networking theory, network security, and mathematical modeling. Dr. Yu actively serves his research communities in various roles, which include the editorial boards of IEEE Transactions on Parallel and Distributed Systems, IEEE Communications Surveys and Tutorials, and three other international journals, TPC of IEEE INFOCOM, symposium co-chairs of IEEE ICC 2014, IEEE ICNC 2013 and 2104, and many different roles of international conference organizing committees. He is a senior member of IEEE, and a member of AAAS.

Dr. Song Guo received the PhD degree in computer science from the University of Ottawa, Canada in 2005. He is currently a Senior Associate Professor at School of Computer Science and Engineering, the University of Aizu, Japan. His research interests are mainly in the areas of protocol design and performance analysis for reliable, energy-efficient, and cost effective communications in wireless networks. Dr. Guo is an associate editor of the IEEE Transactions on Parallel and Distributed Systems and three other journals, and an editor of Wireless Communications and Mobile Computing. He has published over 120 papers in referred journals and conferences. He received the Best Paper Awards at IEEE HPCC 2008 and IEEE SCE 2011, the Outstanding Leadership Award at IEEE ISPA 2008, the Outstanding Service Award at IEEE ICESS 2010, and the prestigious Information Technology Award of Funai Foundation for Information Technology 2008. He guest edited special issues in IEEE Transactions on Emergent Topics in Computing, and four other journals. He has also served on organizing committees and program committees for over 70 international conferences and workshops, like IEEE INFOCOM 2012, IEEE MASS 2011, IEEE WCNC 2008-2012, PIMRC 2009-2011, etc. He is a senior member of the IEEE and the ACM.