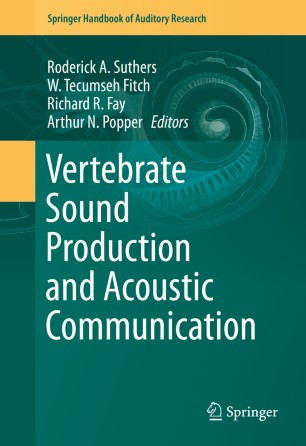 Vertebrate Sound Production and Acoustic Communication serves both as a tutorial introduction for newcomers and a springboard for further research for all scientists interested in understanding animal acoustic signals.

Roderick A. Suthers is Professor in the Medical Sciences program at Indiana University Bloomington.

W. Tecumseh Fitch is Professor of Cognitive Biology at the University of Vienna.

Arthur N. Popper is Professor Emeritus and Research Professor in the Department of Biology at the University of Maryland, College Park.

The Springer Handbook of Auditory Research presents a series of synthetic reviews of fundamental topics dealing with auditory systems. Each volume is independent and authoritative; taken as a set, this series is the definitive resource in the field.

Roderick Suthers is a professor in the Medical Sciences program at Indiana University Bloomington. He studies neural and physiological bases of acoustic behavior, particularly the neuroethology of vocal communication in birds and of echolocation in bats.
Tecumseh Fitch is an evolutionary biologist and cognitive scientist. He is Professor of Cognitive Biology at the University of Vienna.