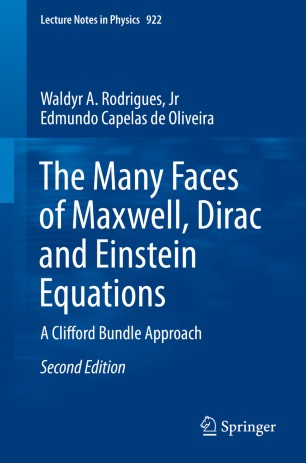 The Many Faces of Maxwell, Dirac and Einstein Equations

This book is an exposition of the algebra and calculus of differential forms, of the Clifford and Spin-Clifford bundle formalisms, and of vistas to a formulation of important concepts of differential geometry indispensable for an in-depth understanding of space-time physics.
The formalism discloses the hidden geometrical nature of spinor fields. Maxwell, Dirac and Einstein fields are shown to have representatives by objects of the same mathematical nature, namely sections of an appropriate Clifford bundle. This approach reveals unity in diversity and suggests relationships that are hidden in the standard formalisms and opens new paths for research.
This thoroughly revised second edition also adds three new chapters: on the Clifford bundle approach to the Riemannian or semi-Riemannian differential geometry of branes; on Komar currents in the context of the General Relativity theory; and an analysis of the similarities and main differences between Dirac, Majorana and ELKO spinor fields.
The exercises with solutions, the comprehensive list of mathematical symbols, and the list of acronyms and abbreviations are provided for self-study for students as well as for classes.

“The text is written in a very readable manner and is complemented with plenty of worked-out exercises which are in the style of extended examples. ... their book could also serve as a textbook for graduate students in physics or mathematics." (Alberto Molgado, Mathematical Reviews, 2008 k)