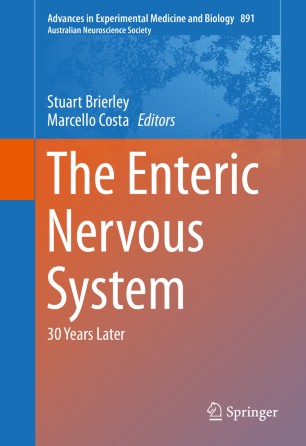 Part of the Advances in Experimental Medicine and Biology book series (AEMB, volume 891)

Nearly 30 years ago, a number of scientists working on the Enteric Nervous System (ENS) gathered at Flinders University, in Adelaide, Australia to discuss the advances and future of their research. It was a friendly and stimulating meeting, attended by most of the major players, in what was to become the discipline of ‘Neurogastroenterology'.

In 2014, the main Australasian Neuroscience Society meeting was held in Adelaide, Australia, providing the perfect opportunity to recreate a follow-up ENS meeting. As such, the ‘ENS II 2014 meeting’ aimed to identify how far the field of enteric neuroscience had developed, where the future was heading, and what technological advances had been made to address current and future unresolved questions. 30 speakers from around the world were invited to give talks and revisit the original expectations, the advances made since, and the future directions of ENS research. These discussions included three generations of investigators from 7 different countries.

This publication represents the majority of proceedings from the ‘The Enteric Nervous System II 2014’ conference, which was held on February 1st - 2nd 2014 at the National Wine Centre of Australia, Adelaide. This meeting was an Official satellite meeting of the 34th Annual Meeting of Australasian Neuroscience Society, which was also held in Adelaide.

The 20 contributions contained within this submission are from international researchers in the field of the ENS, who reviewed the advances made since the first meeting in the early 1980s and summarizes the present and future perspectives of neuro-gastroenterology. Some colleagues could not attend but did send greetings and their messages are included in these proceedings.

Stuart Brierley is an NHMRC R.D Wright Biomedical Fellow and Head of the Visceral Pain Group, Discipline of Medicine, University of Adelaide located in the Centre for Nutrition and Gastrointestinal Diseases at the South Australian Health and Medical Research Institute (SAHMRI).

Prof Brierley is an international authority on the different afferent classes innervating the gut, the mechanotransduction channels underlying their function, the interaction of these channels with inflammatory mediators, and how this changes in acute and chronic pain.

Marcello Costa was born in Turin, Italy, but migrated to Australia in 1970, where he became one of the founders of the new discipline of Neuroscience and the Australian Neuroscience Society (ANS), of which become President in the 1990s. He holds a personal chair in Neurophysiology at Flinders University, the first in Australia. He has published over 230 scientific papers in international journals, 55 reviews and chapters and written two books in enteric neuroscience and gastrointestinal motor functions.

He was foundation co-chair of the the South Australian Neuroscience Institute (SANI) from 2003 to 2010. He is also active in the field of philosophy of science and education in neuroscience to university students and to the broader public.