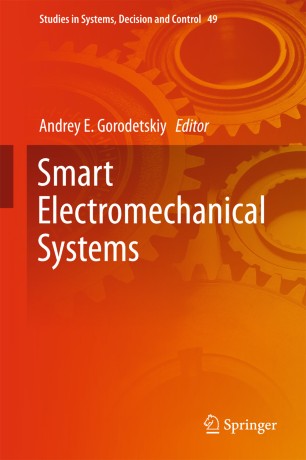 Part of the Studies in Systems, Decision and Control book series (SSDC, volume 49)

This carefully edited book introduces the latest achievements of the scientists of the Russian Academy of Sciences in the field of theory and practice of Smart Electromechanical Systems (SEMS). The book also focuses on methods of designing and modeling of SEMS based on the principles of adaptability, intelligence, biomorphism of parallel kinematics and parallelism in information processing and control computation.

The book chapters are dedicated to the following points of interest:

- methods of design of SEMS modules and intelligent robots based on them;

- synthesis of neural systems of automatic control over SEMS modules;

- mathematical and computer modeling of SEMS modules and Cyber Physical Systems based on them;

- vitality control and reliability analysis based on logic-and-probabilistic and logic-and-linguistic forecasting;

- information-measuring software of SEMS modules and CPS based on them.

This book is intended for students, scientists and engineers specializing in the field of SEMS and robotics, and includes many scientific domains such as kinematics, dynamics, control theory.