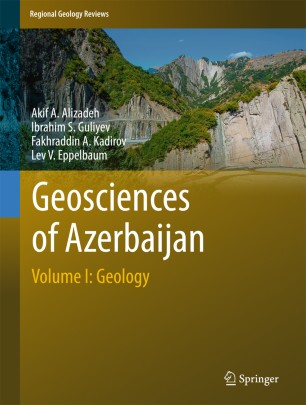 This book provides a multi-scale and multidisciplinary perspective on the geology of Azerbaijan, a country characterized by a unique tectonic and geological setting including the Greater and Lesser Caucasus, the Talysh Mountains, and the Caspian and Kur Basins. Essential geological and geophysical data shed light on the principles of the evolution of the Earth within the region under study, seismic activity and the distribution of economic deposits. Further, special attention is paid to the history of geological-geophysical studies in the region. A combined, comprehensive interpretation of Azerbaijan’s near-surface and deep geological structure is achieved on the basis of an integrative analysis of stratigraphic, magmatic, morphological, lithological, tectonic, neotectonic, geophysical and other data, combining not only Russian and Azerbaijani-published, but also wholly new geological data.

Volume I addresses the needs of researchers focused on geology and the environmental sciences, but will also be of interest to anyone looking to learn more about the natural phenomena in Azerbaijan, a beautiful country situated at the boundary between Europe and Asia.

Akif A. Alizadeh received MSc (1956) from the Azerbaijan Oil Academy, PhD (1961) and DSc (1969) from the Geological Inst. of the Azerbaijan Academy Sciences. More than 40 years he occupied a position of Director of Geology and Geophysics Institute of the National Academy of Sciences (ANAS). In 2013 he was elected as President of ANAS. Professor Akif. Alizadeh is author of more than 370 publications including 8 books. Ak.A. AliZadeh’s main scientific filed is a regional stratigraphy of the Cretaceous deposits in Azerbaijan. He together with followers developed stratigraphic scheme of Cretaceous deposits, analyzed numerous paleontological-stratigraphic materials and generalized the modern ideas of geological processes. His researches designed the basis of sedimentary and volcanogenic-sedimentary formations, distribution and development of the Cretaceous fauna. Prof. Ak.A. Alizadeh’s many years investigations enabled to formulate the principal concepts of study of the Cretaceous Mollusk fauna (belemnites) in Azerbaijan and adjacent regions. His researches cover classification, phylogeny and morphofunctional analysis, the principles of paleo-biogeographic zoning, examination of ecological and paleontological problems. Prof. Alizadeh himself identified the stages of spatial-temporal distribution for the Cretaceous Invertebrates in the Mediterranean and revealed here appropriate paleobiogeographic taxons. Study of morphogenesis in historical aspect, definition of tendency in population’s nature alteration, identification of heritable morphological changes allowed him to restore a general evolution process of various belemnoide groups. Prof. Alizadeh carried out fundamental research for the biogeochemical zonation of the Cretaceous basins in the Caucasus and for examination of geochemical conditions of Paleobasins as evolution factor. Analyzing the microstructural, chemical and crystallochemical peculiarities of matters in skeleton formations of fossils, he revealed the patterns of migration and concentration for various chemical elements, paleophysiological peculiarities for some taxons. Prof. Alizadeh created a description of geochemical ecology for the Cretaceous Invertebrates. Under his advising for the first time absolute values of paleo-temperatures of Azerbaijan Cretaceous basins were determined by isotopic Paleothermometry method.

Ibrahim S. Guliyev received MSc from the Azerbaijan Oil Academy in 1970, and PhD from the Moscow (VNIGNI) in 1978, and D.Sc. in 1989 from the Moscow State University. Since 1970s he has been working at the Geology and Geophysics Institute of the Azerbaijan National Academy of Sciences (ANAS) where now occupies position of a Deputy Director. Since 2013 he is a Vise-President of ANAS. Professor I.S. Guliyev is author of more than 100 publications including 10 books. Scientific interests of I.S. Guliyev cover geology and geochemistry of oil and gas, basin modeling and mud volcanism. Under his supervision and participation have been conducted original investigations of a gas regime in folded areas with the assessment of amount of discharge of carbonaceous gases and their distribution in the surficial atmosphere. His studies of the hydro carbonaceous systems of rapidly subsiding basins (on example of the South Caspian basin) are of a special practical importance. Other scientific interests of Prof. I. Guliyev include results of basin’s simulation, investigations of rates and range of generation, migration and accumulation of hydrocarbons in the terms of rapid subsidence as well as studies of isotopic-geochemical properties of the organic matter, oil, gas and water enabled to determine the depth of generation and preservation of hydrocarbons in the South Caspian basin.

Fakhraddin A. Kadirov received MSc from the Azerbaijan State University in 1972, PhD from the Geophysical Institute of the Georgian Academy of Sciences in 1984, and DSc. from the Geological and Geophysical Institute of the Azerbaijan National Academy of Sciences (ANAS) in 2000. Since 1974 up to now he has been working at the Geology and Geophysics Institute of ANAS where occupied positions of Researcher and Senior Researcher; now he is a Head of the Earth Physics Department. In 2013 he was elected as Academician-Secretary of the Earth’s Science Division of the ANAS Presidium. Professor Fakhraddin Kadirov is author of more than 100 publications including 6 books. Field of scientific interests of F.A. Kadirov covers different aspects of the Earth’s gravity field studies, application of high precise GPS measurements to examination of crustal deformation and tectonic reconstructions. His subsequent research has principally involved the Arabia-Africa-Eurasia plate system. Prof. F.A. Kadirov developed numerous gravity, seismological and integrated geophysical parameter maps of Azerbaijan, Caucasus and adjacent regions.

Lev V. Eppelbaum received MSc from the Azerbaijan Oil Academy in 1982, and PhD from the Inst. of Geophysics (Azerbaijan), Geophysical Inst. of Georgia and Mining Academy (Moscow) in 1989. In 1982-1990 he worked as geophysicist, Researcher and Senior Researcher at the Institute of Geophysics in Baku (Azerbaijan). In 1991-1993 Eppelbaum completed postdoctoral studies in the Dept. of Geophysics and Planetary Sciences at Tel Aviv University; at present he occupies a position of Assoc. Professor at the same Dept. He author of more than 330 publications including 7 books and about 130 articles. His scientific interests cover potential (magnetic, gravity, thermal) and quasi-potential geophysical field analysis in complex environments, integrated interpretation of geophysical and geological data, tectonic, geodynamic, and paleomagnetic reconstructions. Eppelbaum’s research interests include also analysis of nonlinear geophysical processes, archaeological and environmental investigations as well as searching economic minerals.

“The information in the book by Alizadeh et al. is up-to-date, and it is structured logically very well. All descriptions are very professional. … The illustrations in the volume are rich. These include geological maps and profiles, diagrams, and photos. … lt should be also remembered that Azerbaijan is hydrocarbon-rich country, and, thus, many petroleum geologists working there obtain the excellent synthesis of the regional knowledge buying this book.” (Dmitry A. Ruban, Rostov am Don, Zentralblatt für Geologie und Paläontologie, Iss. 1-2, 2017)
Buy options