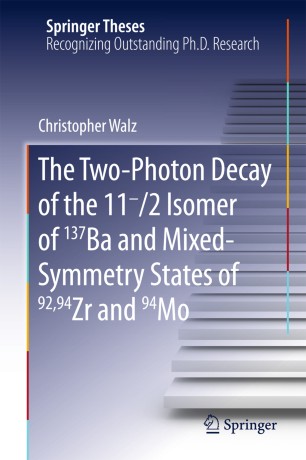 This work focuses on new electromagnetic decay mode in nuclear physics. The first part of the thesis presents the observation of the two-photon decay for a transition where the one-photon decay is allowed. In the second part, so called quadrupole mixed-symmetry is investigated in inelastic proton scattering experiments. In 1930 Nobel-prize winner M. Goeppert-Mayer was the first to discuss the two-photon decay of an exited state in her doctoral thesis. This process has been observed many times in atomic physics. However in nuclear physics data is sparse. Here this decay mode has only been observed for the special case of a transition between nuclear states with spin and parity quantum number 0+. For such a transition, the one-photon decay – the main experimental obstacle to observe the two-photon decay – is forbidden. Furthermore, the energy sharing and angular distributions were measured, allowing conclusions to be drawn about the multipoles contributing to the two-photon transition. Quadrupole mixed-symmetry states are an excitation mode in spherical nuclei which are sensitive to the strength of the quadrupole residual interaction. A new signature for these interesting states is presented which allows identification of mixed-symmetry states independently of electromagnetic transition strengths. Furthermore this signature represents a valuable additional observable to test model predictions for mixed-symmetry states.