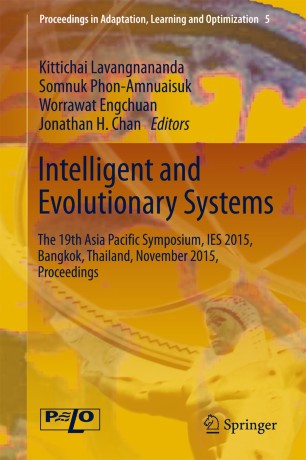 Part of the Proceedings in Adaptation, Learning and Optimization book series (PALO, volume 5)

This PALO volume constitutes the Proceedings of the 19th Asia Pacific Symposium on Intelligent and Evolutionary Systems (IES 2015), held in Bangkok, Thailand, November 22-25, 2015. The IES series of conference is an annual event that was initiated back in 1997 in Canberra, Australia. IES aims to bring together researchers from countries of the Asian Pacific Rim, in the fields of intelligent systems and evolutionary computation, to exchange ideas, present recent results and discuss possible collaborations. Researchers beyond Asian Pacific Rim countries are also welcome and encouraged to participate. The theme for IES 2015 is “Transforming Big Data into Knowledge and Technological Breakthroughs”.