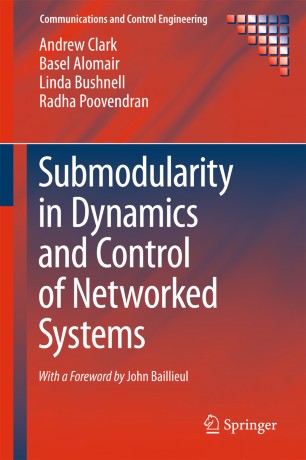 Submodularity in Dynamics and Control of Networked Systems

In turn, the second part develops a unifying submodular optimization approach to controlling networked systems based on multiple performance and controllability criteria. Techniques are introduced for selecting input nodes to ensure smooth convergence, synchronization, and robustness to environmental and adversarial noise. Submodular optimization is the first unifying approach towards guaranteeing both performance and controllability with provable optimality bounds in static as well as time-varying networks. Throughout the text, the submodular framework is illustrated with the help of numerical examples and application-based case studies in biological, energy and vehicular systems.

The book effectively combines two areas of growing interest, and will be especially useful for researchers in control theory, applied mathematics, networking or machine learning with experience in submodular optimization but who are less familiar with the problems and tools available for networked systems (or vice versa). It will also benefit graduate students, offering consistent terminology and notation that greatly reduces the initial effort associated with beginning a course of study in a new area.

Andrew Clark is currently an Assistant Professor in the Department of Electrical and Computer Engineering at Worcester Polytechnic Institute. He received the BS degree in Electrical Engineering and the MS degree in Mathematics from the University of Michigan - Ann Arbor in 2007 and 2008, respectively. He received the PhD degree from the Network Security Lab, Department of Electrical Engineering, at the University of Washington – Seattle in 2014. He is author or co-author of 24 peer-reviewed conference papers and six peer-reviewed journal papers, including the IEEE/IFIP William C. Carter award-winning paper (2010), the WiOpt Best Paper (2012), and the WiOpt Student Best Paper (2014), and was a finalist for the IEEE CDC 2012 Best Student Paper Award. He received the University of Washington Center for Information Assurance and Cybersecurity (CIAC) Distinguished Research Award (2012) and Distinguished Dissertation Award (2014). He holds a patent in privacy-preserving constant-time identification of RFID. He will serve on the Technical Program Committee of IEEE Infocom 2016. His research interests include control and security of complex networks, submodular optimization, control-theoretic modeling of network security threats, and deception-based network defense mechanisms.

Basel Alomair is an Assistant Professor and Founding Director of the National Center for Cybersecurity Technology (C4C) in King Abdulaziz City for Science and Technology (KACST), an Affiliate Professor and co-director of the Network Security Lab (NSL) at the University of Washington-Seattle, an Affiliate Professor at King Saud University (KSU), and a cryptology consultant at various agencies. He was recognized by the IEEE Technical Committee on Fault-Tolerant Computing (TC-FTC) and the IFIP Working Group on Dependable Computing and Fault Tolerance (WG 10.4) with the 2010 IEEE/IFIP William Carter Award for his significant contributions in the area of dependable computing. His research in information security was recognized with the 2011 Outstanding Research Award from the University of Washington. He was also the recipient of the 2012 Distinguished Dissertation Award from the Center for Information Assurance and Cybersecurity at the University of Washington (UW CIAC). He was awarded the 2015 Early Career Award in Cybersecurity by the NSA/DHS Center of Academic Excellence in Information Assurance Research for his contributions to Modern Cryptographic Systems and Visionary Leadership. He authored/co-authored multiple best paper awards.

Radha Poovendran is a Professor and Chairman of the Electrical Engineering Department at UW.  He is an elected Fellow of the IEEE for his contributions to security in cyber physical systems. Professor Poovendran is the founding director of the Network Security Lab (NSL) in the Electrical Engineering Dept. at the University of Washington. He is a founding member and the associate director of research of the University of Washington Center for Excellence in Information Assurance Research and Education. His research interests are in the areas of wireless and sensor network security, cyber-physical system security, adversarial modeling, privacy and anonymity in public wireless networks, control-security, games-security and information theoretic security in the context of wireless mobile networks. Professor Poovendran is a recipient of the NSA LUCITE Rising Star Award, National Science Foundation, ARO YIP, ONR YIP, and PECASE (2005) for his research contributions to multi-user wireless security. He is also a recipient of the Outstanding Teaching Award and Outstanding Research Advisor Award from UW EE (2002) and Graduate Mentor Award from Office of the Chancellor at University of California San Diego (2006). Professor Poovendran was
co-author of award-winning papers including IEEE/IFIP William C. Carter Award Paper (2010) and WiOpt Best Paper Award (2012).

“This book aims to unify techniques for the analysis and design of control algorithms. … This book gives a very precise theoretical presentation of submodular optimization. It also contains many examples, which facilitate the understanding of this subject and guide the reader along the book.” (Fatiha Bendali, Mathematical Reviews, February, 2017)
Buy options