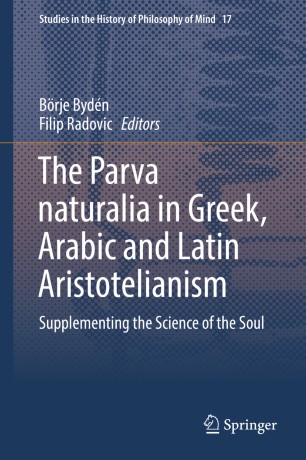 The Parva naturalia in Greek, Arabic and Latin Aristotelianism

Supplementing the Science of the Soul

Part of the Studies in the History of Philosophy of Mind book series (SHPM, volume 17)

This book investigates Aristotelian psychology through his works and commentaries on them, including De Sensu, De Memoria and De Somno et Vigilia. Authors present original research papers inviting readers to consider the provenance of Aristotelian ideas and interpretations of them, on topics ranging from reality to dreams and spirituality. Aristotle’s doctrine of the ‘common sense’, his notion of transparency and the generation of colours are amongst the themes explored.

Chapters are presented chronologically, enabling the reader to trace influences across the boundaries of linguistic traditions. Commentaries from historical figures featured in this work include those of Michael of Ephesus (c. 1120), Albert the Great and Gersonides’ (1288–1344). Discoveries in 9th-century Arabic adaptations, Byzantine commentaries and Renaissance paraphrases of Aristotle’s work are also presented.

The editors’ introduction outlines the main historical developments of the themes discussed, preparing the reader for the cross-cultural and interdisciplinary perspectives presented in this work. Scholars of philosophy and psychology and those with an interest in Aristotelianism will highly value the original research that is presented in this work.
The introduction and Chapter 4 of this book are open access under a CC BY 4.0 license via link.springer.com.

Börje Bydén is a member of the research programme Representation and Reality: Historical and Contemporary Perspectives on the Aristotelian Tradition based at the University of Gothenburg, Sweden. His research interests lie in the history and reception of ancient Greek thought and learning. He has published mainly on the history of philosophical studies in Byzantium. He is currently preparing the editiones principes of Theodore Metochites’ paraphrases of Aristotle’s De anima and De sensu.

Filip Radovic is a Senior Lecturer in Philosophy at Gothenburg University and a member of the research programme Representation and Reality: Historical and Contemporary Perspectives on the Aristotelian Tradition. His research interests mainly concern issues in the philosophy of mind and psychopathology. Radovic’s publications cover topics in contemporary philosophy as well as ancient philosophy. He is currently working on themes connected to illusion and dreaming in the Parva naturalia and related texts.