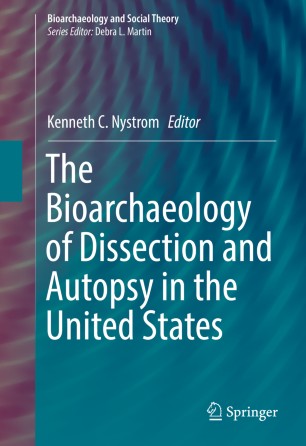 The Bioarchaeology of Dissection and Autopsy in the United States

Encountering evidence of postmortem examinations - dissection or autopsy- in historic skeletal collections is relatively rare, but recently there has been an increase in the number of reported instances. The Bioarchaeology of Dissection and Autopsy brings together in a single volume the skeletal evidence of postmortem examination in the United States. Ranging from the early colonial period to the early 1900’s, from a coffeehouse at Colonial Williamsburg to a Quaker burial vault in lower Manhattan, the contributions to this volume demonstrate the interpretive significance of a historically and theoretically contextualized bioarchaeology. The authors employ a wide range of perspectives, demonstrating how bioarchaeological evidence can be used to address a wide range of themes including social identity and marginalization, racialization, the nature of the body and fragmentation, and the emergence of medical practice and authority in the United States.

Kenneth Nystrom is an Associate Professor in the Department of Anthropology at the State University of New York at New Paltz, USA.  He received his B.A. from the University of Minnesota-Duluth (1997), and his M.S. (1999) and Ph.D. (2005) from the University of New Mexico. He would characterize himself as a broadly trained bioarchaeologist. His early research focused on the Chachapoya of northern Perú where he investigated a range of topics including the reconstruction of mortuary behavior based on paleoentomology, trepanation and trauma, and the impact of Inca conquest on site-specific and regional-level genetic homogeneity using craniometrics. He has also conducted research on long bone cross-sectional geometry in Early Classic elites from Copan, Honduras and post-marital residence patterns among the Chiribaya of southern Perú utilizing craniometrics. His current focus is on African American and almshouse cemeteries from the 19th and 20th centuries in the United States. He grounds his research in the understanding that the biological and social world in which we live is incorporated into and onto our bodies. From this perspective he has examined dental health, trauma, and sex-specific post-manumission migration using strontium isotopes in a historic African American cemetery from New York. Additionally, he considered how the postmortem examination of a young woman from this cemetery can inform on our understanding of how social identity of African Americans was constructed during the 19th century. He is currently analyzing evidence of dissection and surgical experimentation from the Erie County Poorhouse from this same perspective.