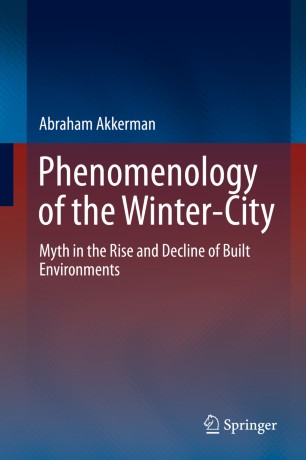 Myth in the Rise and Decline of Built Environments

This book explores how the weather and city-form impact the mind, and how city-form and mind interact. It builds on Merleau-Ponty’s contention that mind, the human body and the environment are intertwined in a singular composite, and on Walter Benjamin’s suggestion that mind and city-form, in mutual interaction, through history, have set the course of civilization. Bringing together the fields of philosophy, urbanism, geography, history, and architecture, the book shows the association of existentialism with prevalence of mood disorder in Northern Europe at the close of Little Ice Age. It explains the implications of city-form and traces the role of the myths and allegories of urban design as well as the history of gender projection onto city-form. It shows how urbanization in Northern Europe provided easier access to shelter, yet resulted in sunlight deprivation, and yielded increasing incidence of depression and other mental disorder among the European middle-class. The book uses the examples of Kierkegaard, Nietzsche, Dostoevsky and Kafka, to show how walking through the streets, squares and other urban voids became the informal remedy to mood disorder, a prominent trait among founders of modern Existentialism. It concludes by describing how the connection of anguish and violence is relevant to winter depression in cities, in North America in particular.