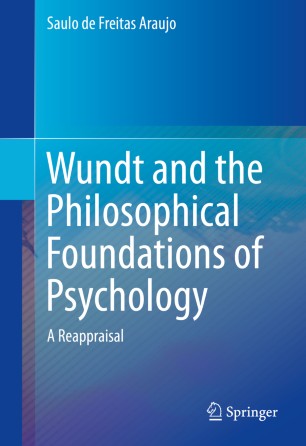 Wundt and the Philosophical Foundations of Psychology

This book reassesses the seminal work of Wilhelm Wundt by discussing the history and philosophy of psychology. It traces the pioneering theorist’s intellectual development and the evolution of psychology throughout his career. The author draws on little-known sources to situate psychological concepts in Wundt’s philosophical thought and address common myths and misconceptions relating to Wundt’s ideas. The ideas presented in this book show why Wundt’s work remains relevant in this era of ongoing mind/brain debate and interest continues in the links between psychology and philosophy.

Wundt and the Philosophical Foundations of Psychology is a valuable resource for researchers, professors, and graduate students in cognitive and related psychology and philosophy disciplines.

“Saulo Araujo raises Wundt scholarship to a new level. This book is the splendid result of intensive studies of the entire Wundt oeuvre.”

“Saulo Araujo, in his study of Wundt’s philosophy and psychology, is as remarkable for the breadth and depth of his scholarship as he is for the clarity of his writing.”

“A milestone, this book serves to establish an advanced level in Wundt studies. Araujo presents a reconstruction of Wundt’s epistemology and philosophy of psychology and corrects misunderstandings in the reception of Wundt’s essential thoughts.”

“I recommend Araujo’s book as an excellent theoretical and historical study. … It is very relevant to contemporary discussions of psychology in the face of the discipline’s increasing fragmentation, lack of reflection, and historical amnesia.” (Gordana Jovanović, Theory & Psychology, 2018)

“I highly recommend this important book. For those involved in science education, especially those concerned with recent debates about teaching the ‘Nature of Science’ (NOS), this will be a challenging and provocative work. … For psychologists, the book may signal a new appreciation for one of the giants of our field.” (Ryan D. Tweney, Science and Education, Vol. 26, 2017)

“Wundt and the Philosophical Foundations of Psychology is the most internalist history that I have ever read, not just in the history of psychology but also in the history of science. … For Wundt scholars, it’s required reading. For historians of early psychology, it’s useful … .” (Thomas Hardy Leahey, PsycCRITIQUES, Vol. 61 (26), June, 2016)