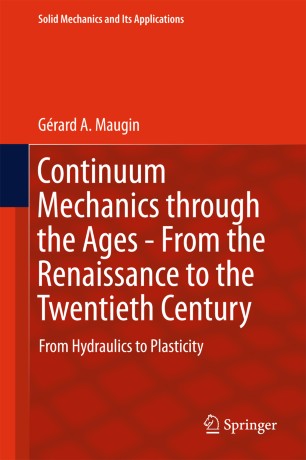 From Hydraulics to Plasticity

Part of the Solid Mechanics and Its Applications book series (SMIA, volume 223)

Mixing scientific, historic and socio-economic vision, this unique book complements two previously published volumes on the history of continuum mechanics from this distinguished author. In this volume, Gérard A. Maugin looks at the period from the renaissance to the twentieth century and he includes an appraisal of the ever enduring competition between molecular and continuum modelling views.

Chapters trace early works in hydraulics and fluid mechanics not covered in the other volumes and the author investigates experimental approaches, essentially before the introduction of a true concept of stress tensor. The treatment of such topics as the viscoelasticity of solids and plasticity, fracture theory, and the role of geometry as a cornerstone of the field, are all explored. Readers will find a kind of socio-historical appraisal of the seminal contributions by our direct masters in the second half of the twentieth century. The analysis of the teaching and research texts by Duhem, Poincaré and Hilbert on continuum mechanics is key: these provide the most valuable documentary basis on which a revival of continuum mechanics and its formalization were offered in the late twentieth century.

Altogether, the three volumes offer a generous conspectus of the developments of continuum mechanics between the sixteenth century and the dawn of the twenty-first century. Mechanical engineers, applied mathematicians and physicists alike will all be interested in this work which appeals to all curious scientists for whom continuum mechanics as a vividly evolving science still has its own mysteries.