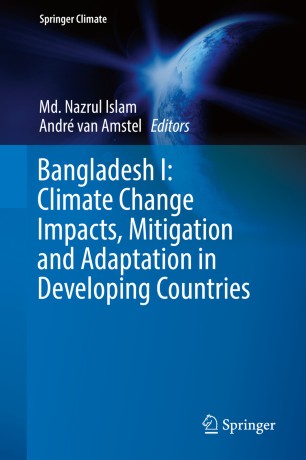 The aim of this book is to provide information to scientists and local government to help them better understand the particularities of the local climate. Climate change is one of the biggest challenges to society. It can lead to serious impacts on production, life and environment on a global scale. Higher temperatures and sea level rise will cause flooding and water salinity problems which bring about negative effects on agriculture and high risks to industry and socio-economic systems in the future. Climate change leads to many changes in global development and security, especially energy, water, food, society, job, diplomacy, culture, economy and trade. The Intergovernmental Panel on Climate Change (IPCC) defines climate change as: “Any change in climate over time, whether due to natural variability or as a result of human activity.” Global climate change has emerged as a key issue in both political and economic arenas. It is an increasingly questioned phenomenon, and progressive national governments around the world have started taking action to respond to these environmental concerns.

Dr. Md. Nazrul Islam is an Associate Professor of the Department of Geography and Environment in Jahangirnagar University, Dhaka-1342, Bangladesh. His fields of interest are environmental and ecological modeling of climate change impact on aquatic ecosystem, phytoplankton transition, harmful algae and environmental management of marine ecosystems regarding to deal with hydrodynamic ecosystems coupled model on coastal sea, bay and estuaries, application of computer based programming for numerical simulation modeling etc. He did his Ph.D. (Ecological Modeling) at Graduate School of Engineering from the University of Tokyo, Japan entitled “Numerical Simulation Modeling on the Transition of Dominant Algae and Toxin Production Mechanism Harmful Algae in Aquatic Ecosystems.” Besides, he has completed two years standard JSPS Postdoctoral Research Fellow on Marine Ecosystems and Engineering from the University of Tokyo, Japan with a novel and interesting research on ‘Numerical simulation of the effects of radioactive pollutants from Fukushima nuclear accident on marine ecosystem by integrating MEC and ECOPATH model at Kamaishi Bay, Pacific Coast in Japan’. Dr. Nazrul also visited as faculty member and invited speakers in several foreign Universities of USA, Australia, UK, Canada, China, South Korea, Germany, France, the Netherlands, Taiwan and Vietnam etc. Dr. Islam has been awarded “Best Young Researcher Award 2012” by the International Society of Ecological Modeling (ISEM) for the outstanding contribution to the Ecological Modeling fields and he has also been awarded “Best Paper Presenter Award” entitled ‘Cyanobacteria Bloom and Toxicity of Lake Kasumigaura in Japan’ by SautaiN in Kyoto, Japan. He has made more than 40 scholarly presentations in more than 25 countries around the world, authored more than 50 peer-reviewed articles and authors of 15 books and research volumes. Currently he is going to publish (jointly with Late Prof. Sven Erik Jorgensen) by the CRC press (Taylor & Francis) approved book “Environmental Management of Marine Ecosystems”. Dr. Islam is presently honored as an “Executive Editor-in-Chief” of the journal “Modeling Earth Systems and Environment”, Springer International Publications (Journal no. 40808).