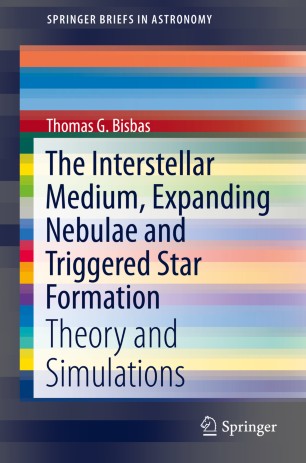 This brief brings together the theoretical aspects of star formation and ionized regions with the most up-to-date simulations and observations. Beginning with the basic theory of star formation, the physics of expanding HII regions is reviewed in detail and a discussion on how a massive star can give birth to tens or hundreds of other stars follows. The theoretical description of star formation is shown in simplified and state-of-the-art numerical simulations, describing in a more clear way how feedback from massive stars can trigger star and planet formation. This is also combined with spectacular images of nebulae taken by talented amateur astronomers. The latter is very likely to stimulate the reader to observe the structure of nebulae from a different point of view, and better understand the associated star formation therein.

Dr. Thomas G. Bisbas is a researcher at the Max-Planck-Institute in Garching (Germany) and at the University of Florida, Gainesville (USA). He received his Ph.D. in Astrophysics from Cardiff University (UK) and his Degree in Physics from the Aristotle University of Thessaloniki (Greece). He has been a postdoctoral researcher at the Academy of Sciences of the Czech Republic, at the University College London (UK) and a visiting researcher at the Harvard-Smithsonian Centre for Astrophysics (USA). His main areas of study include Computational Astrophysics and Astrochemistry of star formation, the interstellar medium and nebulae. He has published several peer-reviewed articles and has given oral presentations in international conferences as well as outreach talks for amateurs astronomers.