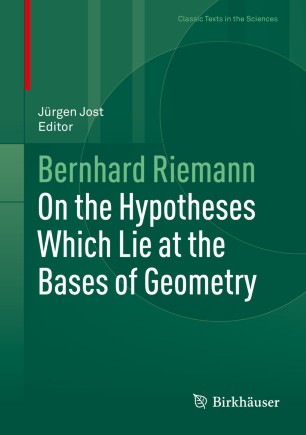 On the Hypotheses Which Lie at the Bases of Geometry

This book presents William Clifford’s English translation of Bernhard Riemann’s classic text together with detailed mathematical, historical and philosophical commentary. The basic concepts and ideas, as well as their mathematical background, are provided, putting Riemann’s reasoning into the more general and systematic perspective achieved by later mathematicians and physicists (including Helmholtz, Ricci, Weyl, and Einstein) on the basis of his seminal ideas. Following a historical introduction that positions Riemann’s work in the context of his times, the history of the concept of space in philosophy, physics and mathematics is systematically presented. A subsequent chapter on the reception and influence of the text accompanies the reader from Riemann’s times to contemporary research.

Not only mathematicians and historians of the mathematical sciences, but also readers from other disciplines or those with an interest in physics or philosophy will find this work both appealing and insightful.