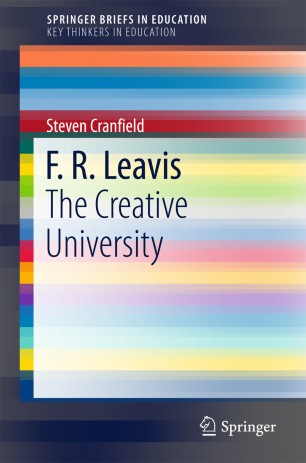 This is a critical introduction to the educational thought of F. R. Leavis (1895–1978), the greatest English literary critic of the twentieth century, providing the first in-depth examination of Leavis’s ideas in relation to contemporary mass higher education. During the course of a long, prolific and controversial academic career, which saw him take issue with figures such as Wittgenstein, T. S. Eliot and C. P. Snow, Leavis became one of the most articulate advocates for the idea of the university as ‘a centre of consciousness and human responsibility’ in the face of what he saw as the relentless technological drive of civilisation. With the journal Scrutiny which he co-founded, as well as his critical writings, Leavis became a decisive influence on generations of teachers in Britain and overseas. Widely misrepresented as narrowly elitist, his ideas about ‘the creative university’, with their radical, student-centred approach to teaching, constitute a powerful resource for a higher education system grappling with the contradictory demands of continuity and change. Based on original research, the study provides an overview of Leavis’s life, work and heritage and his educational world view, and a comprehensive exploration of Leavis’s pedagogy from theoretical and practical perspectives. It also includes a first-hand account by the author of being taught by Leavis in person.

Steven Cranfield is Senior Lecturer in Pedagogic Research in Higher Education at the University of Westminster. He is the author of papers, articles, chapters and books on health, management and leadership,  education and the creative arts. At Westminster he is course leader of the MA in Higher Education and he jointly co-ordinates the Higher Education And Theory (HEAT) network and the Translaborate research group, a transdisciplinary forum exploring the confluence of ideas of translation and collaboration. His books include Training matters (Health Education Authority, 1994), Developing change management skills (with Valerie Iles, 2004) for the UK's National Health Service, and Of purest blue (with Claudio Tedesco, Get A Grip, 2010), an edited co-translation into English of the eminent Spanish poet Francisco Brines. He is a contributing author to Enhancing teaching practice in higher education (edited by Helen Pokorny and Digby Warren, Sage, 2016). Having studied English as an undergraduate with F. R. Leavis, he worked for many years as a healthcare professional, going on to teach, consult and research with a number of universities and national and intergovernmental bodies. During the 1990s he returned to Leavis as the subject of his doctoral research. He is Vice-Chair of the Leavis Society.

1
With this study, Steven Cranfield rehabilitates F. R. Leavis as an educationalist who speaks to the contemporary debate about the university. With its apt title, we are treated here to insights about what it is for a university to be creative. ‘Life’, ‘criticism’ and even ‘civilisation’ are shown to be concepts that may be deployed without flinching. Beautifully written, The Creative University is an admirable introduction to the enigmatic work of a near-forgotten academic and critic whose oeuvre can still live powerfully today. We are in Cranfield’s debt.
Ronald Barnett
Emeritus Professor of Higher Education, UCL Institute of Education, London UK
2
Cranfield does an exemplary service to Leavis in carefully and expertly drawing forth the pedagogic principle of creativity at the heart of his approach to both literature and teaching. Against Leavis’s critics, Cranfield defends a Leavisian pedagogy rooted not in an explicit theory but a set of collaborative linguistic practices whose impact and legacy have been most keenly felt beyond the traditional confines of the academy. In insisting on the connections between Leavis’s thought and practice with those of more recent approaches to literature and learning, this book points to the continuity of an intellectual tradition opposed to the forces of instrumentalism in education.
Dr Matthew Charles
English Literature, Linguistics and Cultural Studies, University of Westminster
3
Steven Cranfield, a former student of Leavis at the University of York, revisits the author in a way that is both accessible and stimulating for an audience whose roots do not necessarily lie in the Great Tradition. His nuanced account both applies and revaluates Leavis’s contribution vis-à-vis the role and purpose of the contemporary university. His insights will not only resonate with teachers and students, but also with historians, academic researchers, and those interested in the future direction of policy and practice in higher education.
Dr Celia Whitchurch
Centre for Higher Education Studies, UCL Institute of Education, London UK
4
In F. R. Leavis: The Creative University, Steven Cranfield attains that rare subtle equilibrium between enthusiasm and objectivity. This admirably condensed portrait illuminates with scrutiny the long, controversial career of the man from the Cambridge ‘margins’ who provoked a reordering of the literary canon as well as profound alterations to future pedagogy. The balanced and detailed survey of the life of innovations and tempestuous interactions – on critical pedagogy, the function of criticism, the importance of literature, the university as creative centre of civilisation – concludes with a delightful account of what Leavis actually conveyed in his poetry readings in his final years in York. Cranfield’s case for Leavis’s contemporary relevance will speak with elegant clarity and vividness to those who don’t know Leavis as to those who do. It is a compelling yet measured rendering of arguably one of the greatest literary critics and educationalists of all time.
Dr Danièle Moyal-Sharrock
University of Hertfordshire, President of the British Wittgenstein Society
5.
This is the first book on Leavis to make ‘pedagogic practice’, rather than literary criticism or cultural theory, the main focus of discussion. As such it opens up a refreshing and interesting new perspective on the subject, and is just the kind of book that ‘Leavis studies’ (as Steven Cranfield formally identifies it) needs if it is show that Leavis still has something to say to the twenty-first century. It is generally well known that Leavis often brought the idea of the university into debate, even when it seemed tangential. The brilliance of this book is to argue that Leavis’s idea of critical exchange between teacher and student was foundational for all his thinking. It manages to combine a useful introductory overview with analysis and discussion that even those who know Leavis’s works very well will find stimulating and challenging. The book is short and readable, but every chapter is densely packed with ideas for further investigation, and with suggestions for new contexts, particularly theories of higher education, for evaluation of Leavis’s thought.
Dr Richard Storer
Department of Humanities and Leeds Centre for Victorian Studies, Leeds Trinity University
Buy options