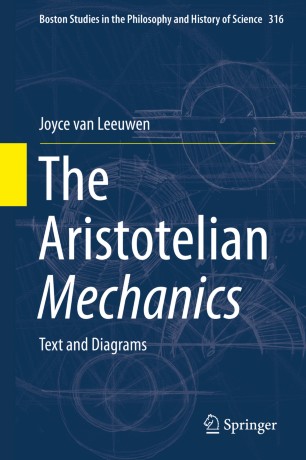 Part of the Boston Studies in the Philosophy and History of Science book series (BSPS, volume 316)

This book examines the transmission processes of the Aristotelian Mechanics. It does so to enable readers to appreciate the value of the treatise based on solid knowledge of the principles of the text. In addition, the book’s critical examination helps clear up many of the current misunderstandings about the transmission of the text and the diagrams. The first part of the book sets out the Greek manuscript tradition of the Mechanics, resulting in a newly established stemma codicum that illustrates the affiliations of the manuscripts. This research has led to new insights into the transmission of the treatise, most importantly, it also demonstrates an urgent need for a new text. A first critical edition of the diagrams contained in the Greek manuscripts of the treatise is also presented. These diagrams are not only significant for a reconstruction of the text but can also be considered as a commentary on the text. Diagrams are thus revealed to be a powerful tool in studying processes of the transfer and transformation of knowledge. This becomes especially relevant when the manuscript diagrams are compared with those in the printed editions and in commentaries from the early modern period. The final part of the book shows that these early modern diagrams and images reflect the altered scope of the mechanical discipline in the sixteenth century.

Joyce van Leeuwen is a Postdoctoral Research Fellow at the Max Planck Institute for the History of Science, Berlin. She received a M.A. (Classics) from the Radboud University Nijmegen, the Netherlands, and a M.A. in German Literature from the same university. She pursued graduate studies at the Excellence Cluster TOPOI (Humboldt University Berlin) and Stanford University. In 2012, she defended successfully her doctoral thesis on the manuscript transmission of the Aristotelian Mechanics. Her analysis of the textual tradition of this treatise has been published in Classical Quarterly (2013). In the academic year 2012-2013 she held an A.W. Mellon Postdoctoral Fellowship in the History of Science at the University of Pittsburgh. Her research interests lie in Greek paleography, diagrammatic reasoning, history of mechanics, and early modern science. She is currently working on visual practices in scientific texts from the early modern period, and analyzes these in the framework of transformation of knowledge.

“Joyce van Leeuwen’s book is an analysis of the manuscript and print tradition of the Mechanics. … the book is a good read for any graduate student dealing with variant readings of texts with a long manuscript or print history. … Van Leeuwen’s book is foundational in its careful examination of the manuscript tradition. Its analysis of the diagrams is unique among studies of the Mechanics.” (Jean De Groot, ISIS, Vol. 109 (1), March, 2018)
Buy options