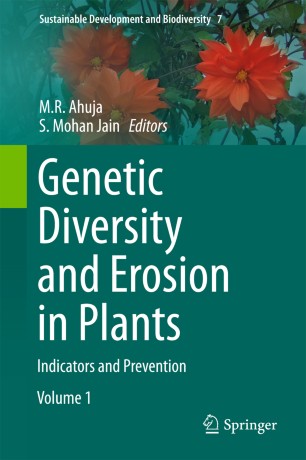 Genetic Diversity and Erosion in Plants

Genetic erosion is the loss of genetic diversity within a species. It can happen very quickly, due to catastrophic events, or changes in land use leading to habitat loss. But it can also occur more gradually and remain unnoticed for a long time. One of the main causes of genetic erosion is the replacement of local varieties by modern varieties. Other causes include environmental degradation, urbanization, and land clearing through deforestation and brush fires. In order to conserve biodiversity in plants, it is important to targets three independent levels that include ecosystems, species and genes. Genetic diversity is important to a species’ fitness, long-term viability, and ability to adapt to changing environmental conditions. Chapters in this book are written by leading geneticists, molecular biologists and other specialists on relevant topics on genetic erosion and conservation genetic diversity in plants. This divisible set of two volumes deals with a broad spectrum of topics on genetic erosion, and approaches to biodiversity conservation in crop plants and trees. Volume 1 deals with indicators and prevention of genetic erosion, while volume 2 covers genetic diversity and erosion in a number of plants species. These two volumes will also be useful to botanists, biotechnologists, environmentalists, policy makers, conservationists, and NGOs working to manage genetic erosion and biodiversity.

See Ahuja CV attached on a previous book proposal "Biotechnology and Biodiversity" by Ahuja and Ramawat (same series). and Jain Cv is attached to this proposal, he's already well known at Springer.