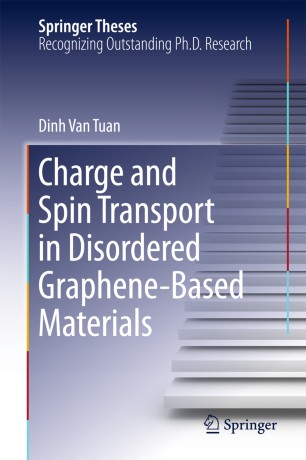 This thesis presents an in-depth theoretical analysis of charge and spin transport properties in complex forms of disordered graphene. It relies on innovative real space computational methods of the time-dependent spreading of electronic wave packets. First a universal scaling law of the elastic mean free path versus the average grain size is predicted for polycrystalline morphologies, and charge mobilities of up to 300.000 cm2/V.s are determined for 1 micron grain size, while amorphous graphene membranes are shown to behave as Anderson insulators. An unprecedented spin relaxation mechanism, unique to graphene and driven by spin/pseudospin entanglement is then reported in the presence of weak spin-orbit interaction (gold ad-atom impurities) together with the prediction of a crossover from a quantum spin Hall Effect to spin Hall effect (for thallium ad-atoms), depending on the degree of surface ad-atom segregation and the resulting island diameter.

Dinh Van Tuan studied theoretical Physics at Ho Chi Minh City University of Science and obtained a masters degree in Theoretical and Mathematical Physics. He then pursued his Ph.D. work at ICN2 from September 2011 till September 2014 during which he developed the first spin dynamics theoretical studies on weakly disordered graphene. Since then, he has been working as post doctorate researcher within the Graphene Flagship project (graphene-flagship.eu/), in the group of ICREA Prof. Stephan Roche. Dinh Van Tuan is in charge of the development of new methodologies to scrutinize the physics of the spin Hall effect in graphene based materials.