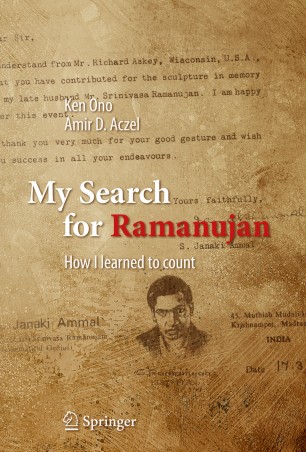 My Search for Ramanujan

How I Learned to Count

"The son of a prominent Japanese mathematician who came to the United States after World War II, Ken Ono was raised on a diet of high expectations and little praise. Rebelling against his pressure-cooker of a life, Ken determined to drop out of high school to follow his own path. To obtain his father’s approval, he invoked the biography of the famous Indian mathematical prodigy Srinivasa Ramanujan, whom his father revered, who had twice flunked out of college because of his single-minded devotion to mathematics.
Ono describes his rocky path through college and graduate school, interweaving Ramanujan’s story with his own and telling how at key moments, he was inspired by Ramanujan and guided by mentors who encouraged him to pursue his interest in exploring Ramanujan’s mathematical legacy.
Picking up where others left off, beginning with the great English mathematician G.H. Hardy, who brought Ramanujan to Cambridge in 1914, Ono has devoted his mathematical career to understanding how in his short life, Ramanujan was able to discover so many deep mathematical truths, which Ramanujan believed had been sent to him as visions from a Hindu goddess. And it was Ramanujan who was ultimately the source of reconciliation between Ono and his parents.
Ono’s search for Ramanujan ranges over three continents and crosses paths with mathematicians whose lives span the globe and the entire twentieth century and beyond. Along the way, Ken made many fascinating discoveries. The most important and surprising one of all was his own humanity."

Ken Ono is the Asa Griggs Candler Professor of Mathematics at Emory University and a Fellow of the American Mathematical Society. He has received many awards for his research in number theory, including a Guggenheim Fellowship, a Packard Fellowship, and a Sloan Fellowship. He was awarded a Presidential Career Award by Bill Clinton in a ceremony at the White House in 2000, and in 2005 he was named the National Science Foundation’s Distinguished Teaching Scholar. Ono served as Associate Producer and Consultant for the forthcoming film on the life and work of Ramanujan, The Man Who Knew Infinity. Additionally, he serves as Editor-in-Chief for several journals, including Research in the Mathematical Sciences and Research in Number Theory, and he is an Editor of The Ramanujan Journal. He also serves as a member of the Editorial Advisory Board for Graduate Texts in Mathematics.

Amir D. Aczel is a bestselling author and historian of science. He received his PhD in Statistics from University of Oregon. Dr. Aczel was awarded a Guggenheim Fellowship in 2004, and he is currently a visiting researcher at Boston University's Center for the Philosophy & History of Science. He has written articles that have been published by the New York Times, the Wall Street Journal, the Jerusalem Post, and the Huffington Post.

“To many, mathematics is seen as an impenetrable wall of logic, symbols and formulas. I would highly recommend this book to those who want to get a meaningful glimpse of what is behind the wall and how the wall can be penetrated. There are too few books that describe the artistic, creative and human, and even spiritual aspect of the mathematical enterprise. ‘My search for Ramanujan’ is therefore a welcome addition to this literature.” (V. Kumar Murty, London Mathematical Newsletter (LMS), newsletter.lms.ac.uk, January, 2017)

“This is an intellectual autobiography and confession of the American number theorist Ken Ono … . book is accessible to any interested reader, mathematician or not. … the numerous photographs appear both in a center color plate section and in black and white where they belong in the text. … Very well written and a good study of how one mathematician’s career developed.” (Allen Stenger, MAA Reviews, maa.org, July, 2016)

“It is clear that the author, giving this account of his life, has great admiration for Ramanujan and feels deeply indebted to him which shows on almost every page of this book. … The book is amply illustrated with grayscale images, which are duplicated in color version in a separate section. All technicalities of the mathematics are avoided so that the book can be read by anyone.” (Adhemar Bultheel, European Mathematical Society, euro-math-soc.eu, May, 2016)
Buy options