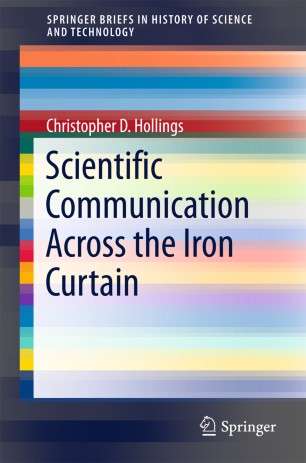 Scientific Communication Across the Iron Curtain

This monograph provides a concise introduction to the tangled issues of communication between Russian and Western scientists during the Cold War. It details the extent to which mid-twentieth-century researchers and practitioners were able to communicate with their counterparts on the opposite side of the Iron Curtain.

Drawing upon evidence from a range of disciplines, a decade-by-decade account is first given of the varying levels of contact that existed via private correspondence and conference attendance. Next, the book examines the exchange of publications and the availability of one side's work in the libraries of the other. It then goes on to compare general language abilities on opposite sides of the Iron Curtain, with comments on efforts in the West to learn Russian and the systematic translation of Russian work.

In the end, author Christopher Hollings argues that physical accessibility was generally good in both directions, but that Western scientists were afflicted by greater linguistic difficulties than their Soviet counterparts whose major problems were bureaucratic in nature.

This volume will be of interest to historians of Cold War science, particularly those who study communications and language issues. In addition, it will be an ideal starting pointing for anyone looking to know more about this fascinating area.