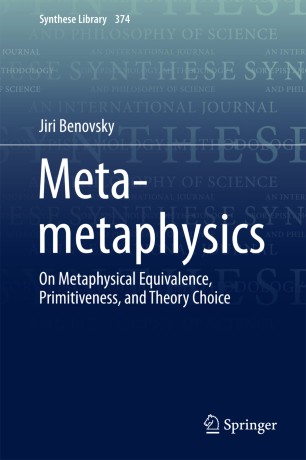 Metaphysical theories are beautiful. At the end of this book, Jiri Benovsky defends the view that metaphysical theories possess aesthetic properties and that these play a crucial role when it comes to theory evaluation and theory choice.
Before we get there, the philosophical path the author proposes to follow starts with three discussions of metaphysical equivalence. Benovsky argues that there are cases of metaphysical equivalence, cases of partial metaphysical equivalence, as well as interesting cases of theories that are not equivalent. Thus, claims of metaphysical equivalence can only be raised locally. The slogan is: the best way to do meta-metaphysics is to do first-level metaphysics.To do this work, Benovsky focuses on the nature of primitives and on the role they play in each of the theories involved. He emphasizes the utmost importance of primitives in the construction of metaphysical theories and in the subsequent evaluation of them.
He then raises the simple but complicated question: how to make a choice between competing metaphysical theories? If two theories are equivalent, then perhaps we do not need to make a choice. But what about all the other cases of non-equivalent "equally good" theories? Benovsky uses some of the theories discussed in the first part of the book as examples and examines some traditional meta-theoretical criteria for theory choice (various kinds of simplicity, compatibility with physics, compatibility with intuitions, explanatory power, internal consistency,...) only to show that they do not allow us to make a choice.
But if the standard meta-theoretical criteria cannot help us in deciding between competing non-equivalent metaphysical theories, how then shall we make that choice? This is where Benovsky argues that metaphysical theories possess aesthetic properties – grounded in non-aesthetic properties – and that these play a crucial role in theory choice and evaluation. This view, as well as all the meta-metaphysical considerations discussed throughout the book, then naturally lead the author to a form of anti-realism, and at the end of the journey he offers reasons to think better of the kind of anti-realist view he proposes to embrace.

Jiri Benovsky began to study metaphysics to try to find a proof that the world really exists. He did not find that proof, but at least he found a job at the University of Fribourg, in Switzerland, where he can not only go in the mountains but also spend his days thinking about things like existence, reality, possible worlds, and most of all - time. Time and philosophical problems surrounding it have always fascinated him to the degree that he devoted half of his first book to it ("Persistence through time and across possible worlds", 2006), as well as a number of articles in international journals. He is also the author of two other books, including one on the philosophy of photography (which, yes, also includes a chapter on how time is represented in photographs).

“Jiri Benovsky’s book is a useful, thought-provoking, and engaging contribution to the literature on ‘meta-metaphysics’. Whilst the core topics under discussion are ‘meta’ or second-order issues … this book will likely be best appreciated by those already somewhat versed in the theories under consideration (most centrally, bundle theory and substratum theory, endurantism and perdurantism, and presentism and eternalism). … this is a thought-provoking book, and one that is an excellent addition to the growing interest in the methodology of metaphysics.” (J. T. M. Miller, dialectica, Vol. 71 (4), 2017)

“Benovsky presents an original if controversial meta-metaphysical picture supported by exceptionally detailed and insightful case studies. … This book is without doubt crucial reading for anyone interested in the growing literature on the methodology of metaphysics, but I would regard it perhaps even more important for those interested in the various first order debates that Benovsky analyzes.” (Tuomas E. Tahko, Notre Dame Philosophical Rerviews, ndpr.nd.edu, July, 2016)