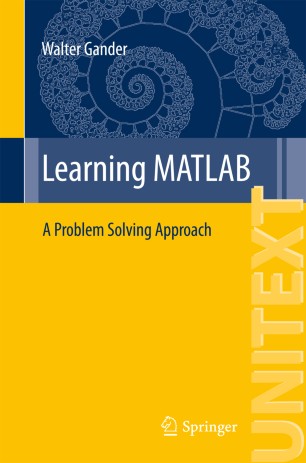 This comprehensive and stimulating introduction to Matlab, a computer language now widely used for technical computing, is based on an introductory course held at Qian Weichang College, Shanghai University, in the fall of 2014.

Teaching and learning a substantial programming language aren’t always straightforward tasks. Accordingly, this textbook is not meant to cover the whole range of this high-performance technical programming environment, but to motivate first- and second-year undergraduate students in mathematics and computer science to learn Matlab by studying representative problems, developing algorithms and programming them in Matlab. While several topics are taken from the field of scientific computing, the main emphasis is on programming.

A wealth of examples are completely discussed and solved, allowing students to learn Matlab by doing: by solving problems, comparing approaches and assessing the proposed solutions.

Walter Gander, born May 24, 1944, from Saanen (BE), Switzerland. Education: Diploma in mathematics ETH Zürich 1968. Then assistant of H. Rutishauser in his new institute of computer science. Ph.D. in mathematics 1973, supervisor P.Henrici.

From 1973 to 1987: Professor for numerical analysis and computer science at the University of Applied Sciences Neu-Technikum Buchs. 1977/78 Visiting Scientist at Stanford University. 1979 Habilitation and Privatdozent for numerical analysis at ETHZ. 1984, 1993 and 2006 sabbatical leaves again at Stanford University. From 1987 to 1991 associate, since 1991 full professor for computer science at ETH Zürich. From 1989 to 1997 head of the Institute of Scientific Computing. 1990 - 1992: chairmen of the faculty of computer science. 1989 -1991 head of the Swiss Supercomputer Initiative for acquiring the national supercomputer in Manno. From Fall 1997 to Fall 2001 chairman of the department and director of education of computer science. After his retirement from ETH in 2009, he became a guest professor at HKBU (Baptist University Hong Kong).