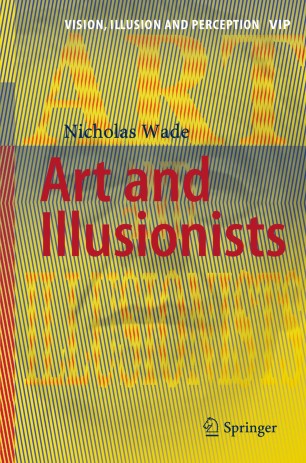 We delight in using our eyes, particularly when puzzling over pictures. Art and illusionists is a celebration of pictures and the multiple modes of manipulating them to produce illusory worlds on flat surfaces. This has proved fascinating to humankind since the dawning of depiction. Art and illusionists is also a celebration of the ways we see pictures, and of our ability to distil meaning from arrays of contours and colours. Pictures are not only a source of fascination for artists, who produce them, but also for scientists, who analyse the perceptual effects they induce. Illusions provide the glue to cement the art and science of vision. Painters plumb the art of observation itself whereas scientists peer into the processes of perception. Both visual artists and scientists have produced patterns that perplex our perceptions and present us with puzzles that we are pleased to peruse. Art and illusionists presents these two poles of pictorial representation as well as presenting novel ‘perceptual portraits’ of the artists and scientists who have augmented the art of illusion. The reader can experience the paradoxes of pictures as well as producing their own by using the stereoscopic glasses enclosed and the transparent overlay for making dynamic moiré patterns.

Nicholas J. Wade is Emeritus Professor of Psychology at the University of Dundee in Scotland. He received his degree in psychology from the University of Edinburgh and his Ph.D. from Monash University, Australia, followed by a postdoctoral fellowship from the Alexander von Humboldt Stiftung, at Max-Planck-Institute for Behavioural Physiology, Germany.  His research is concerned with the representation of space and motion in human vision, the history of vision research, binocular and motion perception, and the interplay between visual science and art. He has carried out psychophysical research on many visual phenomena and has written extensively on the history of the vision and perception. Nick Wade is the author of more than 20 successful books as well as multitudinous influential papers in the field. He is a long time consulting editor of the journal “Perception” and Section editor on Sensory and Behavioral Sciences of the Journal of the History of the Neurosciences.