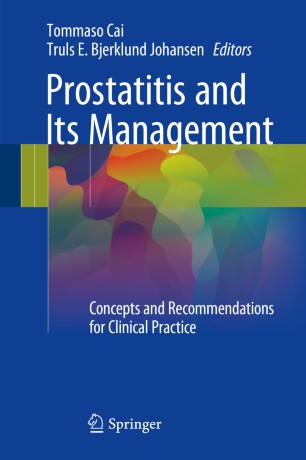 Prostatitis and Its Management

Concepts and Recommendations for Clinical Practice

This book provides comprehensive coverage of the current and emerging management of prostatitis, from diagnosis to therapy. It addresses all clinical aspects of the prostatitis syndrome and equips the reader with all the information needed to offer a tailored therapy. Furthermore, clinical implications of the disease are analyzed and discussed, with particular attention to andrological complications (infertility) and the possible link between prostatitis and prostate cancer. Special consideration is also given to contemporary aspects of prostatitis management relating to antibiotic stewardship and elevated PSA, bearing in mind that thoughtless treatment of prostatitis represents malpractice and sometimes even a forensic issue. The final chapter comprising questions and answers will be valuable for quick consultation in everyday clinical practice. This book will be a truly practical guide for physicians involved in the diagnostic work-up and treatment of patients suspected of having prostatitis and will also serve as a ready source of information for all physicians who occasionally see prostatitis patients.

Tommaso Cai graduated cum laude in Medicine from the University of Florence, Italy, in 2002 and subsequently completed his specialization in Urology at the university. In 2010 he was appointed consultant urologist in the Department of Urology, Santa Chiara Hospital, Trento, Italy. In 2013 he became a member of the Board of Directors of the Italian Society of Andrology and chairman of the society’s Study Group on Urological Infections. He was appointed Associate Professor of Urology (ASN – Italy) in 2014, and in 2015 became a member of the European Association of Urology’s guideline board on urological infections. Dr. Cai is the author of more than 200 publications in books in Italian and international journals (including 100 original articles) on issues relating to prostate and bladder cancer, urinary tract infections, sexually transmitted diseases, and the use of novel technologies.

Truls Erik Bjerklund Johansen is Full Professor of Urology and Head Urologist in the Urology Department, Oslo University Hospital, Norway. He is Chairman of the European Society for Infections in Urology (ESIU), a full section of the European Association of Urology (EAU), and Co-chairman of the EAU Guidelines Panel on Urinary Tract Infections. Dr. Johansen has been a consultant in general surgery and urology since 1984 and was chairman of the Urology Department, Aarhus University Hospital, Denmark from 2007 to 2012 before joining the Oslo Universit

y Hospital in 2013. He was Professor in Medicine (Urology) and Chairman of the Norwegian Institute of Urology at the University of Tromsø, Norway, from 1993 to 2001, Professor in Medical Science, Telemark University College, Norway from 2002 to 2005, and Professor II in Urology, University of Aarhus, Denmark, from 2007 to 2012. His main research interests are urogenital infections, especially hospital-acquired infections and antimicrobial resistance, and minimally invasive treatment of prostate and kidney cancer. He has published numerous original papers, review articles, case reports, and book chapters and has been the chairman and organizer of numerous international meetings and symposia.

“This is a comprehensive overview of the current approach to prostatitis, including diagnosis and management. … This is a much-needed manual for a thorny problem facing all practitioners. The audience is clinicians who manage prostatitis patients. It also may be a worthwhile book for residents who are about to enter clinical practice but have had little exposure to the outpatient care of these patients.” (Perry R. Weiner, Doody's Book Reviews, June, 2016)