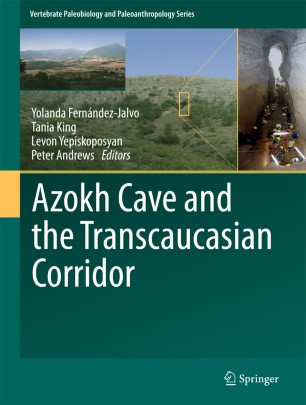 Azokh Cave and the Transcaucasian Corridor

his edited volume describes the geology, stratigraphy, anthropology, archaeology, dating, taphonomy, paleobotany, paleontology and paleoecology of Azokh caves (also known as Azykh or Azikh). The chapters review exhaustively the key recent research on this limestone karstic site, which is located near the village of the same name in the region of Nagorno Karabagh in the south-eastern end of the Lesser Caucasus. The site is significant due to its geographic location at an important migratory crossroad between Africa and Eurasia. These caves contain an almost complete sedimentary sequence of the transition between H.heidelbergensis and H. neanderthalensis continuing to later Pleistocene and Holocene stratified sediment. The site is also important due to the discovery of Neanderthal remains by the current research group in addition to the Middle Pleistocene hominin fossils during a previous phase of excavation work led by M. Huseinov. At the heart of this book is the matter of how this site relates to human evolution.

Dr. Yolanda Fernandez-Jalvo is a researcher at the Museo Nacional de Ciencias Naturales (CSIC), Spain in the Department of Paleobiology.
Dr. Tania King is co-Director with Dr. Fernández-Jalvo of the Azokh Project and afiliated to the Blandford Museum, UK.
Dr. Peter Andrews is a research scientist in the Department of Palaeontology, The Natural History Museum, London.
Dr. Levon Yepiskoposyan is Head of the Human Genetics Group at the Institute of Molecular Biology in the National Academy of Sciences, Armenia.