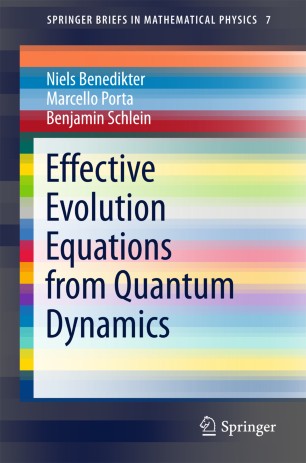 These notes investigate the time evolution of quantum systems, and in particular the rigorous derivation of effective equations approximating the many-body Schrödinger dynamics in certain physically interesting regimes. The focus is primarily on the derivation of time-dependent effective theories (non-equilibrium question) approximating many-body quantum dynamics. The book is divided into seven sections, the first of which briefly reviews the main properties of many-body quantum systems and their time evolution. Section 2 introduces the mean-field regime for bosonic systems and explains how the many-body dynamics can be approximated in this limit using the Hartree equation. Section 3 presents a method, based on the use of coherent states, for rigorously proving the convergence towards the Hartree dynamics, while the fluctuations around the Hartree equation are considered in Section 4. Section 5 focuses on a discussion of a more subtle regime, in which the many-body evolution can be approximated by means of the nonlinear Gross-Pitaevskii equation. Section 6 addresses fermionic systems (characterized by antisymmetric wave functions); here, the fermionic mean-field regime is naturally linked with a semiclassical regime, and it is proven that the evolution of approximate Slater determinants can be approximated using the nonlinear Hartree-Fock equation. In closing, Section 7 reexamines the same fermionic mean-field regime, but with a focus on mixed quasi-free initial data approximating thermal states at positive temperature.