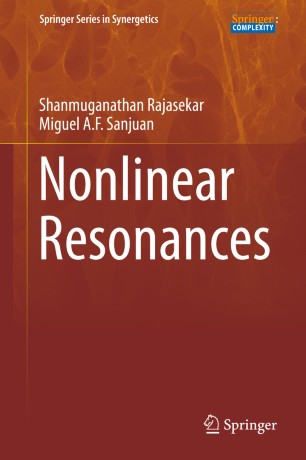 This introductory text presents the basic aspects and most important features of various types of resonances and anti-resonances in dynamical systems. In particular, for each resonance, it covers the theoretical concepts, illustrates them with case studies, and reviews the available information on mechanisms, characterization, numerical simulations, experimental realizations, possible quantum analogues, applications and significant advances made over the years.

Resonances are one of the most fundamental phenomena exhibited by nonlinear systems and refer to specific realizations of maximum response of a system due to the ability of that system to store and transfer energy received from an external forcing source. Resonances are of particular importance in physical, engineering and biological systems - they can prove to be advantageous in many applications, while leading to instability and even disasters in others.

The book is self-contained, providing the details of mathematical derivations and techniques involved in numerical simulations. Though primarily intended for graduate students, it can also be considered a reference book for any researcher interested in the dynamics of resonant phenomena.

Miguel Sanjuan is full professor of physics at the Universidad Rey Juan Carlos in Madrid, Spain, where he founded the Physics Department in 2006. He is a corresponding member of the Spanish Royal Academy of Sciences, section physics and chemistry, and a foreign member of the Lithuanian Academy of Sciences in the areas of physics and mechanical engineering. Prof. Sanjuan is presently the head of the Nonlinear Dynamics, Chaos and Complex Systems Research Group at the Universidad Rey Juan Carlos.

Shanmuganathan Rajasekar is full professor at the School of Physics, Bharathidasan University, India. He received the Ph.D. degree in Physics (Nonlinear Dynamics) in 1992 under the supervision of Prof. M. Lakshmanan with whom, he co-authored the Springer textbook Nonlinear Dynamics: Integrability, Chaos and Patterns. His recent research focuses on nonlinear dynamics with a special emphasis on nonlinear resonances.

“The authors have identified a really remarkable set of modern-day topics which resonate (pun inevitable and intended) with the main themes of the book. … The book is intended for graduate students but, as suggested in the book, one is confident that it will find a ready market amongst researchers in the broad area of nonlinear dynamics who require an accessible reference work on nonlinear resonances. The authors of this volume have performed a valuable service for that community.” (K. Alan Shore, Contemporary Physics, Vol. 57 (4), 2016)