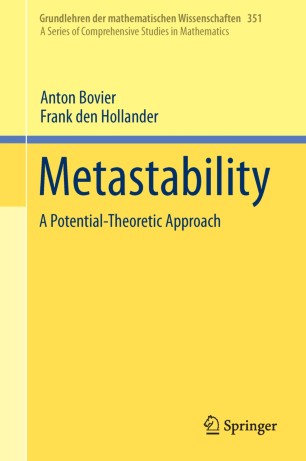 Metastability is a wide-spread phenomenon in the dynamics of non-linear systems - physical, chemical, biological or economic - subject to the action of temporal random forces typically referred to as noise. This monograph provides a concise presentation of mathematical approach to metastability based on potential theory of reversible Markov processes.

The authors shed new light on the metastability phenomenon as a sequence of visits of the path of the process to different metastable sets, and focus on the precise analysis of the respective hitting probabilities and hitting times of these sets.

The theory is illustrated with many examples, ranging from finite-state Markov chains, finite-dimensional diffusions and stochastic partial differential equations, via mean-field dynamics with and without disorder, to stochastic spin-flip and particle-hopping dynamics and probabilistic cellular automata, unveiling the common universal features of these systems with respect to their metastable behaviour.

The monograph will serve both as comprehensive introduction and as reference for graduate students and researchers interested in metastability.

Anton Bovier is Professor of Mathematics at the University of Bonn.  His research concerns applications of probability theory in physics and biology, with a focus on statistical mechanics, metastability and ageing. He has published over 130 scientific papers, and a monograph on “Statistical Mechanics of Disordered Systems”. He is a Fellow of the Institute for Mathematical Statistics. He is member of the Clusters of Excellence “Hausdorff Centre for Mathematics” and “ImmunoSensation”, both at the University of Bonn.

Frank den Hollander is Professor of Mathematics at Leiden University. His research focuses on probability theory, statistical physics, population dynamics and complex networks. He has published over 150 scientific papers, and two monographs on “Large Deviations” and “Random Polymers”. He is a member of the Royal Dutch Academy of Sciences, and a Fellow of the American Mathematical Society and of the Institute of Mathematical Statistics. He is recipient of a 5-year Advanced Grant by the European Research Council and a 10-year consortium grant by the Dutch Ministry of Education, Culture and Science.

“This monograph gives a complete and detailed account of the most recent techniques developed to obtain a precise mathematical description of the phenomenon of metastability. … The book is well organized and well written, it contains a large amount of fundamental ideas and techniques, and it is an important reference for any researcher interested in the study of long-time behavior of Markov processes and applications to statistical mechanics.” (Jean-Baptiste Bardet, Mathematical Reviews, April, 2017)

“No doubt, this is a fundamental book written by well established scientists whose contribution to this area is widely recognized. The book is addressed to readers with serious mathematical background and interests in metastability of stochastic dynamical systems. The books is also an excellent references source.” (Jordan M. Stoyanov, zbMATH 1339.60002, 2016)