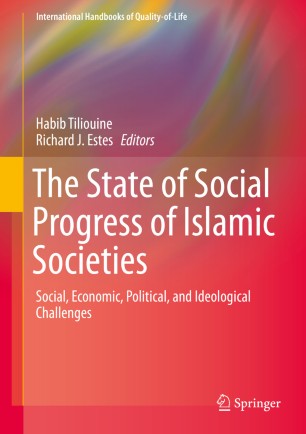 The State of Social Progress of Islamic Societies

This handbook addresses the historical background of the Islamic world and reviews its basic past intellectual achievements. It studies social progress of these regions and sub-regions in comparison with other parts of the world. It uses large data sets and well established statistically weighted Indexes in order to assess the nature and pace of the multiple facets of social change in member states of the Organization of Islamic Cooperation (OIC). The handbook extensively discusses the main challenges confronting the Islamic nations in the social, economic, political, and ideological fields.
Though it is recognizable that social change in the Islamic World is generally positive, it remains highly variable in pace and there is room to speed it up to the benefit of millions of deprived Muslim people. Hence, the book studies the different propositions and programs of action, such as the United Nations’ Millennium Development Campaign and the OIC’s Ten-Year Programme of Action to present an integrated and comprehensive agenda of action to help improve the situation in the Islamic World.

Habib Tiliouine is an active member of both the International Society of Quality of Life Studies (ISQOLS) and the International Wellbeing Group (IWGp) since 2003. He is a member of many international Journals Editorial Boards (Journal of Happiness Studies, Applied Research in Quality of Life and the International Journal of Happiness and Development ...). He wrote more than 20 articles and book chapters and participated in many International Conferences worldwide.
Habib Tiliouine is the head founder of the Laboratory of Educational Processes & Social Context (Labo-PECS) of Oran University, Algeria (in 2001) which conducts survey research for public information and policy purposes. The time series database contains questionnaire responses of more than 16,000 people from different geographic regions of the country, including the Southern Sahara areas. Two of these surveys were partly financed by the Algerian Agence Nationale de la Recherche sur la Santé (ANDRS). He published papers on social development, quality of life and the relationship between Subjective Well-Being, Regional Algerian Cultures and other factors (Health, Religiosity, Meaning in Life and Eudaimonic Well-Being facets).
Tiliouine has also collaborated with UNICEF to produce national reports analysing the situation of Algerian children and school indicators. He supervises Magister and Doctorat research theses on Quality of Life, psychology and Education.
Richard J. Estes is Professor of Social Work at the University of Pennsylvania in Philadelphia. He holds an A.B. degree from La Salle University in Philadelphia and graduate degrees in social work from the University of Pennsylvania (Master of Social Work) and the University of California at Berkeley (Doctor of Social Welfare). He also holds a post-master’s Certificate in Psychiatric Social Work from the Menninger Foundation in Topeka, Kansas.
Dr. Estes’ international activities have been extensive. Among other assignments, he has held visiting Professorships in Iran, Norway, and the People’s Republic of China, Morocco, South Korea, Hawaii, Ja-pan, Mongolia, the Russian Federation, Belgium, Sweden, Mexico, Hong Kong and elsewhere. In the United States, Dr. Estes is founding President of the Philadelphia Area Chapter of the Society for Inter-national Development (SID). He is a former president of the Group for the Advancement of Doctoral Education (GADE), and is a former Chair of the Council on External Relations of the Global Commission of the Council on Social Work Education (CSWE). In 2004 he was elected President of the International Society For Quality of Life Studies (ISQOLS).
Until 2010, Dr. Estes served as Chair of the graduate concentration in Social and Economic Development (SED where he also directed the School’s international programs.
Dr. Estes has been the recipient of many awards and grants for his research on international social work and comparative social development including two Fulbright-Hays Senior Research Awards (Iran, 1978 and Norway, 1979) and a Fulbright Scholar Award to Yonsei University in Seoul, Korea (1994). In 1992, he was elected “Social Worker of the Year” by the Pennsylvania Chapter of the National Association of Social Workers for his international activities. In 1996 he received the Alumni Recognition Award from the University Of Pennsylvania School Of Social Work. In 1997 he was awarded the Distinguished Recent Contribution to Social Work Education Award by the Council on Social Work Education (CSWE), the International Rhoda G. Sarnat Award of the National Association of Social Workers (NASW) and the “Best Article in Social Indicators Research Award of the International Society of Quality of Life Studies (ISQOLS). In 2002 he was appointed Distinguished Visiting Scholar of United College of the Chinese University of Hong Kong where he served as an External Examiner for the University’s Department of Social Work until 2008. In 2005, the Global Commission of the Council on Social Work Education awarded Dr. Estes its Partner in International Education Award. In 2007, Dr. Estes received the Distinguished Quality of Life Research Award of the International Society for Quality of Life Studies (ISQOLS) and, during winter, 2012, he spent three months as University Distinguished Professor at the Chinese University of Hong Kong and two weeks at Beijing Normal University, Beijing, China.

“It is a very welcome and very good addition to the series, providing an indispensable introduction to one of the most neglected areas in the field of research on the quality of life, social indicators or human well-being, namely, Islamic Societies. … a treatise that should be on the shelf of every scholar and every politician with any interest in what has happened over many years of Islamic history and what has been happening in the last decade.” (Alex C. Michalos, Applied Research Quality Life, Vol. 12, 2017)
Buy options