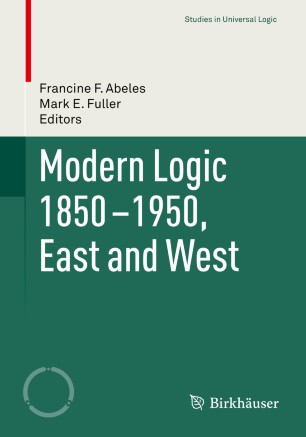 This book presents diverse topics in mathematical logic such as proof theory, meta-mathematics, and applications of logic to mathematical structures. The collection spans the first 100 years of modern logic and is dedicated to the memory of Irving Anellis, founder of the journal 'Modern Logic', whose academic work was essential in promoting the algebraic tradition of logic, as represented by Charles Sanders Peirce. Anellis’s association with the Russian logic community introduced their school of logic to a wider audience in the USA, Canada and Western Europe. In addition, the collection takes a historical perspective on proof theory and the development of logic and mathematics in Eastern Logic, the Soviet Union and Russia.

The book will be of interest to historians and philosophers in logic and mathematics, and the more specialized papers will also appeal to mathematicians and logicians.

“Modern Logic, 1850–1950, East and West is a memorial volume for the respected historian of logic Irving H. Anellis … . an excellent job identifying the distinctive features of this work in accessible terms and is able to reflect on its historical importance and broader social context from firsthand experience. … an excellent starting point for any historical study of this avenue of mathematical research. Overall, this volume is a fitting tribute to Anellis and the journal he founded.” (Andrew Aberdein, Isis, Vol. 108 (3), September, 2017)
Buy options