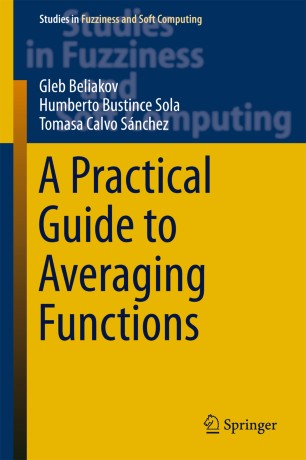 A Practical Guide to Averaging Functions

Part of the Studies in Fuzziness and Soft Computing book series (STUDFUZZ, volume 329)

This book offers an easy-to-use and practice-oriented reference guide to mathematical averages. It presents different ways of aggregating input values given on a numerical scale, and of choosing and/or constructing aggregating functions for specific applications. Building on a previous monograph by Beliakov et al. published by Springer in 2007, it outlines new aggregation methods developed in the interim, with a special focus on the topic of averaging aggregation functions. It examines recent advances in the field, such as aggregation on lattices, penalty-based aggregation and weakly monotone averaging, and extends many of the already existing methods, such as: ordered weighted averaging (OWA), fuzzy integrals and mixture functions. A substantial mathematical background is not called for, as all the relevant mathematical notions are explained here and reported on together with a wealth of graphical illustrations of distinct families of aggregation functions. The authors mainly focus on practical applications and give central importance to the conciseness of exposition, as well as the relevance and applicability of the reported methods, offering a valuable resource for computer scientists, IT specialists, mathematicians, system architects, knowledge engineers and programmers, as well as for anyone facing the issue of how to combine various inputs into a single output value.