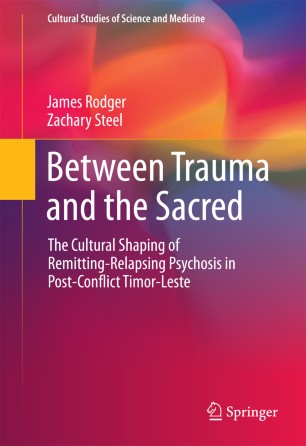 Between Trauma and the Sacred

This volume develops a dynamic but contextualized multi-level formulation of psychosis and psychotic-symptoms, able to incorporate a range of factors from the biological, through the sociocultural, to the political. The work is truly interdisciplinary drawing on both the quantitative and qualitative findings of our own study but further supported through local ethnography and broader anthropological enquiry into the outcomes of psychosis in non-Western settings; psychoanalysis and psychoanalytic anthropology; evidence and theory exploring links between trauma, dissociation and psychosis; and novel culturally-adaptable psychosocial focused interventions for psychosis. We situate both evidence and theorising in wider epistemological and political context, including in relation to the movement for Global Mental Health. Culturally patterned presentations of brief remitting-relapsing psychosis are ultimately conceived as the trade-off between competing fragmentary and synthetic forces: the former in part secondary to the lasting and deleterious effects of overwhelming loss, trauma and adversity; the latter emboldened by cultural meaning and social response in the context of broad ecological pressures demanding survival and resilience.

Dr. James Rodger is a Consultant Child and Adolescent Psychiatrist in the United Kingdom National Health Service and an Honorary Associate Research Fellow at the University of Exeter. He holds an additional degree in Medical Anthropology and has undertaken postgraduate training in Systemic Practice. His principle clinical and research interest is the developmental, social and cultural aspects of psychotic phenomena and related implications for intervention. He undertook the key fieldwork forming the basis of this work in 2004, in the context of an 18-month mental health research program in Timor-Leste. In addition Dr Rodger has provided expert evidence relating to transcultural trauma-related psychiatric presentations for both asylum and criminal cases. Previous publications relate to the wider epidemiological research findings and implications from Timor-Leste, to critical-relational challenges to psychiatric practice, and to the anthropology of altered mental states.

Dr. Zachary Steel is a clinical psychologist who holds the St John of God Professorial Chair of Trauma and Mental Health, School of Psychiatry, University of New South Wales and Richmond Hospital, New South Wales, Australia. Dr Steel has developed a program of mental health research across culturally diverse communities and settings with a particular focus on traumatic stress, forced displacement, conflict and culturally specific symptoms of mental disorder and distress. Within the Asia-Pacific region he is involved in collaborative mental health research programs in Vietnam, Aceh-Indonesia, and Timor-Leste as well as with asylum seeker and refugee communities in Australia and amongst Aboriginal communities in Far West New South Wales. His research with asylum seeker populations in Australia has helped to develop an evidence base on the adverse mental health consequences of harsh asylum policies including the use of immigration detention and temporary protection visas.