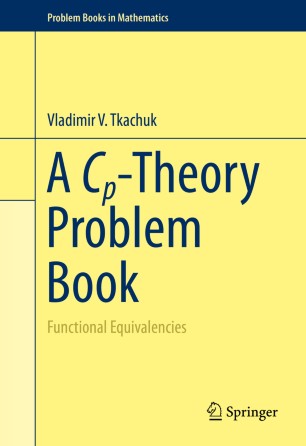 This fourth volume in Vladimir Tkachuk's series on Cp-theory gives reasonably complete coverage of the theory of functional equivalencies through 500 carefully selected problems and exercises. By systematically introducing each of the major topics of Cp-theory, the book is intended to bring a dedicated reader from basic topological principles to the frontiers of modern research. The book presents complete and up-to-date information on the preservation of topological properties by homeomorphisms of function spaces.  An exhaustive theory of t-equivalent, u-equivalent and l-equivalent spaces is developed from scratch.   The reader will also find introductions to the theory of uniform spaces, the theory of locally convex spaces, as well as  the theory of inverse systems and dimension theory. Moreover, the inclusion of Kolmogorov's solution of Hilbert's Problem 13 is included as it is needed for the presentation of the theory of l-equivalent spaces. This volume contains the most important classical results on functional equivalencies, in particular,  Gul'ko and Khmyleva's example of  non-preservation of  compactness by t-equivalence, Okunev's method of constructing  l-equivalent spaces and the theorem of Marciszewski and Pelant on u-invariance of absolute Borel sets.
From the reviews of Special Features of Function Spaces: “This is a well-written and very interesting book from several points of view and can be used as a textbook for
courses in both Cp-theory and general topology as well as a reference guide for specialists working in Cp-theory and related topics. Additionally, the material can also be considered as an introduction to advanced set theory and descriptive set theory. …I hope that this book becomes the right hand of students and researchers in mathematics.” (Mathematical Reviews)

From the reviews of Topological and Function Spaces:  “It is designed to bring a dedicated reader from basic topological principles to the frontiers of modern research. The only background needed is some knowledge of set theory and real numbers. …This volume can also be used as a reference for mathematicians working in or outside of the field of topology (functional analysis) wanting to use results or methods of Cp-theory.” (Mathematical Reviews)