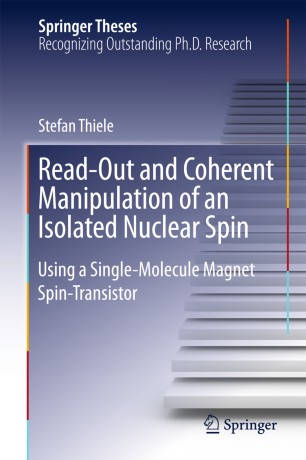 Read-Out and Coherent Manipulation of an Isolated Nuclear Spin

This thesis sheds new light on the worldwide first electrical manipulation of a single nuclear spin. Over the last four decades, the size of a bit, the smallest logical unit in a computer, has decreased by more than two orders of magnitude and will soon reach a limit where quantum phenomena become important. Inspired by the power of quantum mechanics, researchers have already identified pure quantum systems, having, analog to a classical bit, two controllable and readable states. In this regard, the inherent spin of electrons or nuclei with its two eigenstates, spin up and spin down, is a promising candidate. Using expertise in the field of single-molecule magnets, the author developed a molecular transistor, which allows quantum information to be written onto a single nuclear spin by means of an electric field only, and, in addition, enables the electronic read-out of this quantum state. This novel approach opens a path to addressing and manipulating individual nuclear spins within a very confined space (a single molecule), at high speed. Thus, the author was able to show that single molecule magnets are promising candidates for quantum information processing, which is triggering a new field of research towards molecular quantum electronics.