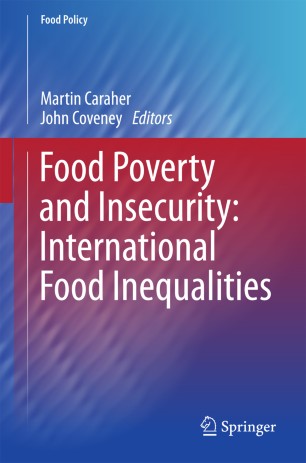 While there is not one global definition of the term ‘food poverty,’ the evidence from the chapters in this book suggest food poverty can be seen from three perspectives: 1) the causes and constraints facing both individuals, households, communities and policy makers, 2) constrained choices or the ‘lived experience’ and 3) the health impacts or outcomes. As a working definition of food poverty, this approach suggests that where constraints are such that it is not possible for individuals or households to consume a nutritionally adequate diet, they could be considered to be in food poverty.

The modern food system has introduced new complexities to food insecurity with the growth of micro-nutrient inequalities. As a result of growing levels of poverty and inequality, hunger and obesity are not being faced by two different groups, but often by the same group. While the developed world faces a problem with overconsumption and chronic diseases, the developing world is addressing the double burden of hunger and over-consumption. Even in the developed world, nation states are facing the rise of modern malnutrition, which includes both over-consumption and the re-emergence of hunger: over-consumption combined with austerity.

The volume undertakes a critical examination of food poverty and food security by addressing topics such as tensions over the role of the state, the movement towards rights and responsibilities around food, and the rising tide of food poverty. Auth

ors also cover possible solutions at both national and city state levels. The editors conclude with a chapter that draws together the issues and locates solutions within a food policy framework of the total food system. These studies help reveal the complexities of food insecurity within a global context, with the goal of clarifying taken for granted assumptions in present discourses.