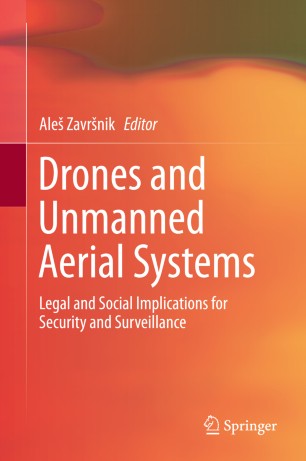 Legal and Social Implications for Security and Surveillance

This book tackles the regulatory issues of Unmanned Aerial Systems (UAS) or Remotely-Piloted Aerial Systems (RPAS), which have profound consequences for privacy, security and other fundamental liberties. Collectively known as “drones,” they were initially deployed for military purposes: reconnaissance, surveillance and extrajudicial executions. Today, we are witnessing a growth of their use into the civilian and humanitarian domain. They are increasingly used for goals as diverse as news gathering, aerial inspection of oil refinery flare stacks, mapping of the Amazonian rain-forest, crop spraying and search and rescue operations.

The civil use of drones is becoming a reality in the European Union and in the US.The drone revolution may be a new technological revolution. Proliferation of the next generation of “recreational” drones show how drones will be sold as any other consumer item. The cultural perception of the technology is shifting, as drones are increasingly being used for humanitarian activities, on one hand, but they can also firmly be situated in the prevailing modes of postmodern governance on the other hand.

This work will be of interest to researchers in Criminology and Criminal Justice interested in issues related to surveillance, security, privacy, and technology. It will also provide a criminological background for related legal issues, such as privacy law, aviation law, international criminal law, and comparative law.

Aleš Završnik Doctor of Law ( LL.D.), Assistant Professor, is researcher at the Institute of Criminology at the Faculty of Law in Ljubljana. He is a postdoctoral Yggdrasil fellow at the Department of Criminology and Sociology of Law at University of Oslo (2012) and was a postdoctoral fellow at the Max-Planck-Institute für ausländisches und internationals Strafrecht, Freiburg i. Br. (2009) and a fellow of the World Federation of Scientists, Geneva (2008). At the moment he collaborates in the European Cooperation in Science and Technology (COST) Action “Living in Surveillance Societies” and the COST Action “Cyberbullying”. Aleš Završnik edited a book Crime and Technology: How Computers Transform Surveillance and Privacy, Crime and Crime Control? (2010) and published a book Homo Criminalis: Images of a Criminal in High- Tech Risk Society (2009). He has researched and published on theoretical criminology, criminal law and “law and technology”, i.e. cybercrime, cyber-law and surveillance. He is a member of the editorial board of the Masaryk University Journal of Law and Technology. Contact information: Institute of Criminology at the Faculty of Law, Ljubljana, Poljanski nasip 2, SI-1000 Ljubljana, Slovenia.