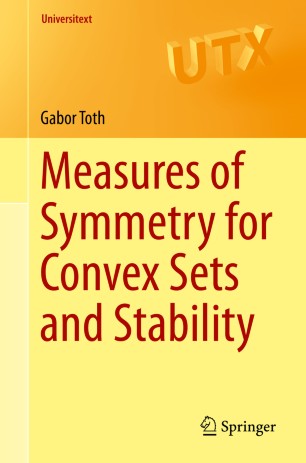 Measures of Symmetry for Convex Sets and Stability

This textbook treats two important and related matters in convex geometry: the quantification of symmetry of a convex set—measures of symmetry—and the degree to which convex sets that nearly minimize such measures of symmetry are themselves nearly symmetric—the phenomenon of stability. By gathering the subject’s core ideas and highlights around Grünbaum’s general notion of measure of symmetry, it paints a coherent picture of the subject, and guides the reader from the basics to the state-of-the-art. The exposition takes various paths to results in order to develop the reader’s grasp of the unity of ideas, while interspersed remarks enrich the material with a behind-the-scenes view of corollaries and logical connections, alternative proofs, and allied results from the literature. Numerous illustrations elucidate definitions and key constructions, and over 70 exercises—with hints and references for the more difficult ones—test and sharpen the reader’s comprehension.

The presentation includes: a basic course covering foundational notions in convex geometry, the three pillars of the combinatorial theory (the theorems of Carathéodory, Radon, and Helly), critical sets and Minkowski measure, the Minkowski–Radon inequality, and, to illustrate the general theory, a study of convex bodies of constant width; two proofs of F. John’s ellipsoid theorem; a treatment of the stability of Minkowski measure, the Banach–Mazur metric, and Groemer’s stability estimate for the Brunn–Minkowski inequality; important specializations of Grünbaum’s abstract measure of symmetry, such as Winternitz measure, the Rogers–Shepard volume ratio, and Guo’s Lp -Minkowski measure; a construction by the author of a new sequence of measures of symmetry, the kth mean Minkowski measure; and lastly, an intriguing application to the moduli space of certain distinguished maps from a Riemannian homogeneous space to

spheres—illustrating the broad mathematical relevance of the book’s subject.

Gabor Toth is Chair of the Department of Mathematical Sciences at Rutgers University, Camden. His research interests include harmonic maps and minimal immersions and convex geometry. He is the author of Glimpses of Algebra and Geometry, as well as Finite Möbius Groups, Spherical Minimal Immersions, and Moduli.

“The book under review is a graduate-level textbook on convexity, which presents the topic from a new and interesting point of view. … The book offers the reader a new approach to the study of convexity, focusing on the important topics of measures of symmetry and stability. It moves from the very beginning background to recent research, and therefore both students and researchers can benefit from it.” (María A. Hernández Cifre, Mathematical Reviews, December, 2016)

“This is a graduate-level textbook on convex geometry in finite-dimensional Euclidean spaces, which has some interesting special features. … Each chapter has illustrating figures and concludes with exercises … . The book has a surprising appendix, where certain of the symmetry measures are applied to convex bodies … . This book is an unconventional introduction to convexity, full of appealing intuitive geometry; it may equally well serve the beginner and the experienced researcher in the field.” (Rolf Schneider, zbMATH 1335.52002, 2016)