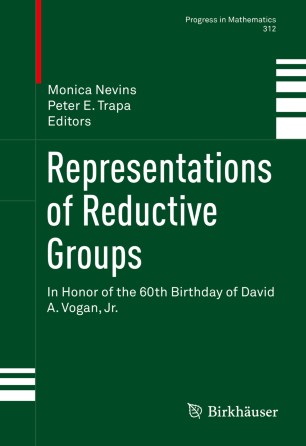 In Honor of the 60th Birthday of David A. Vogan, Jr.

Part of the Progress in Mathematics book series (PM, volume 312)

Over the last forty years, David Vogan has left an indelible imprint on the representation theory of reductive groups.  His groundbreaking ideas have lead to deep advances in the theory of real and p-adic groups, and have forged lasting connections with other subjects, including number theory, automorphic forms, algebraic geometry, and combinatorics.

Representations of Reductive Groups is an outgrowth of the conference of the same name, dedicated to David Vogan on his 60th birthday, which took place at MIT on May 19-23, 2014.  This volume highlights the depth and breadth of Vogan's influence over the subjects mentioned above, and point to many exciting new directions that remain to be explored.  Notably, the first article by McGovern and Trapa offers an overview of Vogan's body of work, placing his ideas in a historical context.