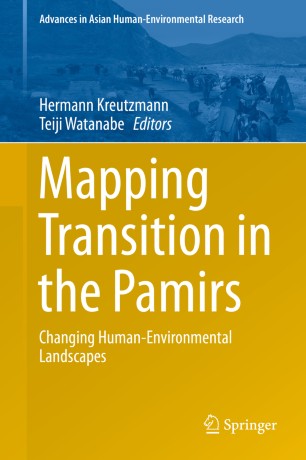 Mapping Transition in the Pamirs

By emphasizing on the Pamir region a comprehensive overview of path-dependent and recent developments in a remote mountain region is provided in this book. Overall neglect in the mountainous periphery is contrasted by shifting the centre of attention to the Pamirs situated at the interface between South and Central Asia. From colonial times to now there has been a debate on grasping and locating the area. Here field-work based contributions are collected to provide a variety of perspectives on the Pamirs highlighting transformation and transition in Post-Soviet societies as well as in Afghanistan and Pakistan. The similar ecological environment across borders features the common ground while analyzing development processes in a set of case studies that aim at highlighting certain aspects of regional development.

Prof. Hermann Kreutzmann has been a professor of human geography at Freie Universität Berlin since April 2005. He had previously completed his doctorate at the Department of Earth Sciences at Freie Universität Berlin in 1989. Kreutzmann’s research focuses on geographical development studies. He conducts his research mainly in high mountain areas, especially in South and Central Asia, in the context of globalization and climate change debates. His research also focuses on sustainable resource use as well as minority studies and migration research.

Hermann Kreutzmann is a recipient of the Tianshan Prize China from the Xinjiang Uyghur Autonomous Region. He received the award for his “outstanding contribution to the economic and social progress” of this region located in northwest China. For more than 25 years Kreutzmann has been conducting research there on issues of resource use and the development of mountain regions. In addition, he was honored for his contribution to scientific cooperation and his support of German-Chinese cooperation in the education of young scientists. This award is the highest that can be awarded to a foreign expert in Xinjiang.