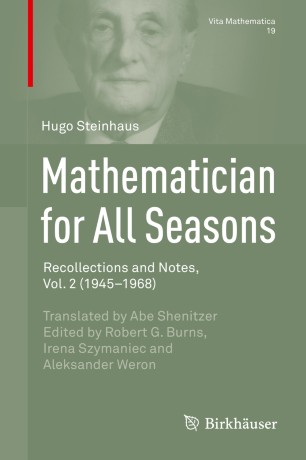 Mathematician for All Seasons

This book presents, in his own words, the life of Hugo Steinhaus (1887–1972), noted Polish mathematician of Jewish background, educator, and mathematical popularizer. A student of Hilbert, a pioneer of the foundations of probability and game theory, and a contributor to the development of functional analysis, he was one of those instrumental to the extraordinary flowering of Polish mathematics before and after World War I. In particular, it was he who “discovered” the great Stefan Banach. Exhibiting his great integrity and wit, Steinhaus’s personal story of the turbulent times he survived – including two world wars and life postwar under the Soviet heel – cannot but be of consuming interest. His recounting of the fearful years spent evading Nazi terror is especially moving. The steadfast honesty and natural dignity he maintained while pursuing a life of demanding scientific and intellectual enquiry in the face of encroaching calamity and chaos show him to be truly a mathematician for all seasons.

The present work will be of great interest not only to mathematicians wanting to learn some of the details of the mathematical blossoming that occurred in Poland in the first half of the 20th century, but also to anyone wishing to read a first-hand account of the history of those unquiet times in Europe – and indeed world-wide – by someone of uncommon intelligence and forthrightness situated near an eye of the storm.

“The diary entries are a fascinating combination of the personal: the dangers and frustrations of daily life in a country ravaged by war, and the historical: life in a country that is slipping into the smothering grasp of the Soviet Union. … These entries show that Steinhaus followed world events very closely and had access to information beyond the state controlled media. They make for fascinating reading.” (J. M. Plotkin, Mathematical Reviews, January, 2017)

“It was published in a nice and careful way. Many interesting pictures have been included. … The book will be certainly of great interest both for historians of mathematics as well as for all wishing to learn … the history of Polish mathematics in the years after WWII. It shows how the famous Lvov school of mathematics found the continuation in the new Poland and how Polish mathematics has been restored after the war.” (Roman Murawski, zbMATH 1334.01007, 2016)