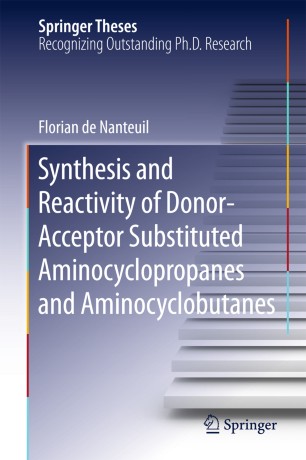 This thesis presents a general approach to accessing nitrogen-substituted hetero- and carbocycles. In short, the annulation reactions developed in the thesis make it possible to access nitrogen-substituted four-, five- and six-membered rings, all essential building blocks for the synthesis of bioactive molecules. Many natural products display a saturated polycyclic core allowing a well-defined arrangement of functional groups in space. As such, they can interact with biological targets with a high degree of affinity and selectivity, surpassing many synthetic drugs. Nevertheless, the efficient synthesis of such complex ring systems poses a challenge for organic chemistry. Through careful tuning of the electronic properties of a nitrogen donor group and a diester acceptor group, the first [3+2] annulation reaction between aminocyclopropanes and enol ethers or carbonyl compounds is now possible. The reaction proceeded under mild catalytic conditions, and the building blocks obtained can be found at the core of bioactive alkaloids, drugs such as Ramipril and biomolecules such as DNA and RNA. Thanks to the dynamic kinetic asymmetric annulation of aminocyclopropanes with enol ethers and aldehydes, access to enantioenriched compounds is also now possible. Lastly, a synthesis of donor-acceptor aminocyclobutanes via [2+2] cycloaddition using a cheap iron catalyst was developed, allowing them to be used in [4+2] annulations to access cyclohexylamines.