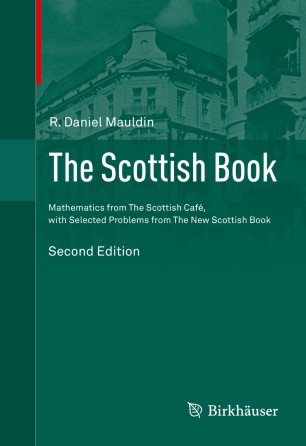 Mathematics from The Scottish Café, with Selected Problems from The New Scottish Book

The second edition of this book updates and expands upon a historically important collection of mathematical problems first published in the United States by Birkhäuser in 1981.  These problems serve as a record of the informal discussions held by a group of mathematicians at the Scottish Café in Lwów, Poland, between the two world wars.  Many of them were leaders in the development of such areas as functional and real analysis, group theory, measure and set theory, probability, and topology.  Finding solutions to the problems they proposed has been ongoing since World War II, with prizes offered in many cases to those who are successful.

In the 35 years since the first edition published, several more problems have been fully or partially solved, but even today many still remain unsolved and several prizes remain unclaimed.  In view of this, the editor has gathered new and updated commentaries on the original 193 problems.  Some problems are solved for the first time in this edition. Included again in full are transcripts of lectures given by Stanislaw Ulam, Mark Kac, Antoni Zygmund, Paul Erdös, and Andrzej Granas that provide amazing insights into the mathematical environment of Lwów before World War II and the development of The Scottish Book.  Also new in this edition are a brief history of the University of Wrocław’s New Scottish Book, created to revive the tradition of the original, and some selected problems from it.

The Scottish Book offers a unique opportunity to communicate with the people and ideas of a time and place that had an enormous influence on the development of mathematics and try their hand on the unsolved problems. Anyone in the general mathematical community with an interest in the history of modern mathematics will find this to be an insightful and fascinating read.

“The book under review is interesting not only for historians of mathematics. It gives a vivid picture of the mathematical life in Lvov between the world wars and offers an opportunity to see the people and ideas of that time that had an enormous influence on the development of mathematics.” (Roman Murawski, zbMATH 1331.01039, 2016)